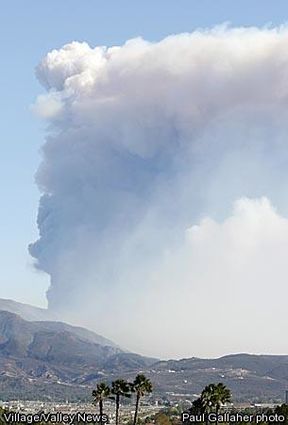 The Poomacha fire approaches Temecula around 3:30 p.m. as fires raged across the region on Tuesday, Oct. 23, 2007.

In addition to the Rice Fire and other fires ravaging Fallbrook,

Rainbow, and DeLuz, the Poomacha fire which began October 23

created still another threat to residents and firefighters.

The fire which was first reported near the La Jolla Indian

Reservation at 3:13 a.m. that Tuesday morning had spread to

the fire had spread to part of Valley Center.

The evacuation of Valley Center closed the offices of

but Roadrunner editor David Ross maintained a blog to