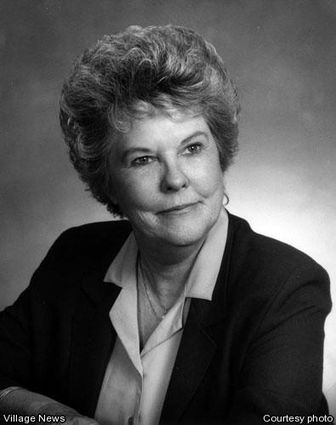 Join us to remember the life and contributions of Jenny Lee McCoy (née Parker) at Berry, Bell & Hall Funeral Home on December 15. Viewing is 10 to 11 a.m. and the funeral service is 11 a.m. to noon.

Immediately after the service, a Celebration of Life Luncheon catered by Allie’s of Temecula will be served at the Fallbrook Women’s Club. RSVP to Cathy at (951) 845-8361.

Jenny, a longtime resident of Fallbrook and active member of the community, passed away on December 4 from complications of Alzheimer’s disease.

In 1942, Jenny moved with her family as a young girl to Fallbrook from Colinwood, TN. She graduated from Fallbrook High in 1949 and embarked upon a career as a fashion buyer for many large department stores.

After earning success in the working world with her energy and sense of style, she met and married Leason McCoy, a decorated WWII veteran and career officer in the United States Marine Corps, in 1959.

Married for 38 years, Jenny and Leason traveled the world, including three years in Japan.

After the McCoys returned to Fallbrook in 1972, Leason retired from the Marines. Never sedentary, they became realtors serving the Fallbrook community and were famous for the lively, entertaining parties held at their McDonald Road residence.

Always active in the community, Jenny served as a member and officer of many civic organizations. She was a lifetime member of the Fallbrook Chamber of Commerce, member of Heart Beat, So. Cal. 10th Marine Division, MOAA and Fallbrook Hospital Auxiliary.

She was the treasurer of TROA; vice president, president and director, over the years, of the Fallbrook Realtor Board; and president of the Military Order of the World Wars.

After Leason’s death in 1995, Jenny continued to remain active in her profession and her community until her progressing Alzheimer’s forced her to retire. Her wit, energy, drive and enthusiasm will be fondly remembered by her friends and family.

Her sister Mary Eva Catherine Carner survives Jenny, along with several nieces and nephews, many of whom live in Fallbrook or the surrounding area.