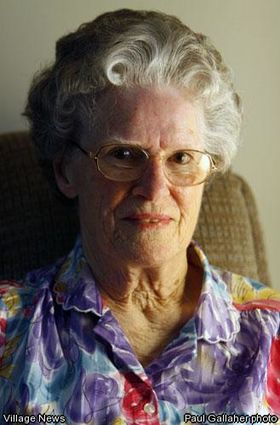 Mary Ann Goudy volunteers much of her time to organizations like St. Vincent de Paul, the Fallbrook Food Pantry and the Fallbrook Library.

Fallbrook resident Mary Ann Goudy dedicates much of her time volunteering with a variety of wonderful organizations in the community, such as the St. Vincent De Paul Thrift Shop, Fallbrook Library and Fallbrook Food Pantry.

“I like to do what I can to help people,” said Goudy.

Her dedication has been both appreciated and recognized by many.

Although her childhood dreams of becoming a nurse never came to fruition, it’s no surprise that her caring and nurturing ways with people have bloomed into being an avid volunteer.

“On Mondays I work at St. Vincent De Paul, on Tuesdays I am at the library and on Thursdays I work at the Food Pantry,” she said.

Born in Kansas, Goudy has lived most of her life in California. “When I got married in 1950, I came to California.” What brought Goudy to Fallbrook was to be near her beloved daughter, son-in-law and grandchildren, who reside in town.

Family has always been important to Goudy. As a child growing up, life could be taxing, especially during the Depression era.

Though many fathers walked away from their families during this tough time, she said, “my father took his responsibilities very seriously.”

In April of this year, Goudy was diagnosed with lymphoma. Her radiation treatments slowed her ability to work her normal amount of volunteer hours. However, she said continuing her volunteer work during the treatments was helpful.

“Volunteering gave me the motivation to get up and go and to not think about me,” she explained.

Though radiation had the tendency to make her weary at times, she looked forward to working with her co-volunteers.

Goudy remains a huge supporter and promoter for volunteering since it has brought so much joy to her life. “There is something out there for anyone and there are dozens of organizations that need volunteers.”

Goudy openly admits she is not the outgoing and gregarious type. In fact, she is very shy.

At first, her timidity made it a challenge for her to ask organizations if they needed help. “It was difficult to get started volunteering because I’m shy,” she said. “I had to push myself.”

Through the years, she has received a great deal of satisfaction knowing that she is doing something useful rather than just sitting at home all day. If she comes home a bit tired after her volunteer day, her happiness trumps it.

“There is a lot of fun, pleasure and joy when mixing with other people,” she said.

When Goudy is not volunteering, she spends time watching the hummingbirds gather at her front porch.

“They give me so much joy,” she said. “Sometimes they have me in hysterics because they are feathered clowns.”

On a daily basis, Goudy makes her feathered friends sugar water and keeps two feeders filled. She has been feeding hummingbirds for the last 20 years.

Her mixture is so popular that there is often a swarm of 30 birds waiting for a turn at the feeder. “They are God’s little creatures, and so feisty, too. I just love them.”

As Goudy turns 77 years young this month, she claims she has learned something rather special in being a volunteer: “There is a lot of goodness in people.”