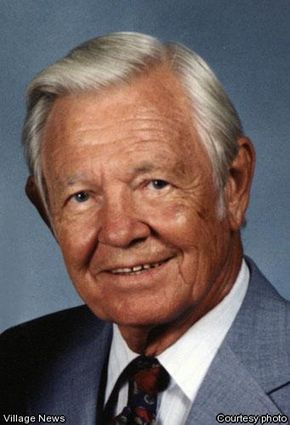 He was born October 25, 1921, the middle child of Nile and Elizabeth Frempter in Mehoopany, PA, where he grew up, graduating from high school in the neighboring town of Tunkhannock.

After a year at the University of Pennsylvania, Dr. Frempter entered Syracuse University, earning a Bachelor’s degree in English in 1943. He joined the USNR V-12 program at Syracuse Medical School and received a doctorate in medicine in 1946, at which time he married Marie Coon, a Syracuse graduate.

In June 1947, Dr. Frempter was commissioned as a Lt. (j.g.) MC, USN. Among his active duty assignments was a tour in American Samoa, where he treated various tropical diseases including leprosy. Later he was assigned to Camp Pendleton and was sailing to Japan when the Korean War Truce was signed.

Dr. Frempter received an honorable discharge in 1954 and was in private practice in Temple City and then Arcadia for 20 years, on the staffs of Methodist Hospital of Southern California and Santa Teresita, among others.

The Frempters had three sons, George Jr. (now 59), Gerald (57) and Richard (54). The boys grew up in Arcadia, where Dr. Frempter was active in many community organizations, including Exchange Club, AFS, Little League and notably eight years on the Arcadia School Board. He was known as an accessible, careful, caring healer who communicated well and was beloved by his patients and friends.

In 1974, after the sudden death of his wife, Dr. Frempter retired to live quietly with some travel, fishing and golf. He married Norma Barron of Arcadia in 1984. They moved to Fallbrook, where Gerald, a general contractor, built them a home overlooking the magnificent Santa Margarita River Valley.

As a lifelong Methodist, Dr. Frempter helped found the Sierra Madre Methodist Church. Subsequently, he and his family were active members of the Church of the Good Shepherd, Arcadia, and then Fallbrook United Methodist Church (1844 Winterhaven Road), where a memorial service will be held on Saturday, January 19, at 11:30 a.m.

In lieu of flowers, the family suggests donations to the Scholarship Fund, which he founded, at the Fallbrook church, Fallbrook Hospice or Fallbrook Healthcare Foundation’s Adult Day Care Center.