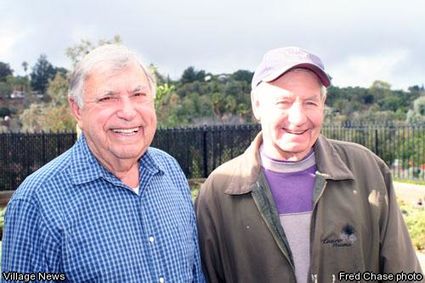 Imagine you are in your seventies and socializing at the Fallbrook Senior Center. A stranger who is also in his silver years approaches you and wants to know a bit about your past. After less than two minutes of chatter, you realize that you are not strangers but were schoolmates in grade school. This amazing situation happened with Leo Pawlisa and Les Schuchmann.

It was Schuchmann who approached Pawlisa at the Senior Center and wanted to know where he was originally from. “He recognized me from when I was a kid,” said Pawlisa. “I was dumbfounded, because this doesn’t happen every day!”

It had been nearly 70 years since Pawlisa and Schuchmann had seen each other in Centralia, IL, at Lake View Elementary School. “The school was so small we had to go outside to turn around,” quipped Schuchmann. The one-room schoolhouse had a coatroom and an outhouse.

As boys, they lived up the road from one another and lived a very rural kind of farm life. “We both lived on farms and we walked about one and a quarter miles on a gravel road to get to school,” said Pawlisa.

Schuchmann and Pawlisa confess that they really could not consider themselves close friends back then, but one thing was for certain: they fought a lot. “We fought about anything,” said Pawlisa.

“Fighting was the only entertainment we had,” wisecracked Schuchmann.

These boys would fight on a daily basis, while walking all the way to and from school. Their fights were comical, they boasted: “We were like roosters fighting; there were feathers flying.”

When the fights started, Pawlisa said the boys were on their feet, but it wasn’t long before they ended up on the ground. “It toughened you up for life,” said Pawlisa, laughing.

Despite the punches, Pawlisa and Schuchmann enjoyed their childhood. “I loved my boyhood; we went fishing all the time,” said Schuchmann.

Listening to radio shows was a treat for Pawlisa back in the day. “I listened to Jack Armstrong and Lum and Abner on the radio once a week,” he said. “My other favorite was the Lone Ranger and Tonto.”

So who started the boyhood fights? The fingers point to Pawlisa.

was ornery, and it was that ornery look in his eyes that I remembered at the Senior Center,” joked Schuchmann.

Pawlisa does confess he was the mischievous one and always getting into trouble. In fact, he has their class photo from Lake View Elementary School. In it, Pawlisa and Schuchmann are standing next to one another. The grin that radiates from Pawlisa is somewhat naughty in nature.

The last time Schuchmann and Pawlisa saw one another was in eighth grade. As these boys grew into men, they eventually left Illinois and found themselves in California. 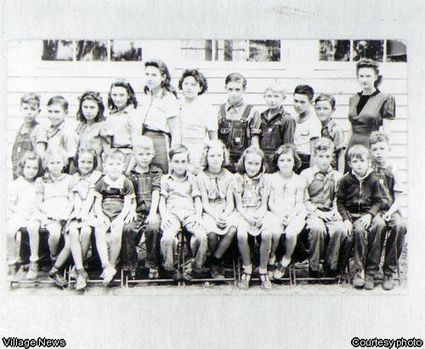 Back in grade school, Schuchmann (back row, left) and Pawlisa (second from left) pose for a photo outside their one-room schoolhouse in Centralia, IL.

Schuchmann lived all over the country before settling in California. While in his twenties, before he made a career for himself in the carpentry business, he was a professional baseball player. “I’ve been a carpenter for 57 years,” he said, “and moved to Fallbrook 11 years ago.”

Like Schuchmann, Pawlisa got into the field of construction. He and his wife, Dorothy, moved to Fallbrook more than 30 years ago. He built commercial and residential properties. “Construction has been kind to me,” he said.

After 70 years, Schuchmann and Pawlisa admit they’ve mellowed out a bit. They are enjoying the company of one another and neither has yet attempted to take a swing.

Reuniting after so many years has made Pawlisa quite pensive about life. “Stay in touch with people,” he says. “Just because they are out of sight doesn’t mean that they are out of your mind.”