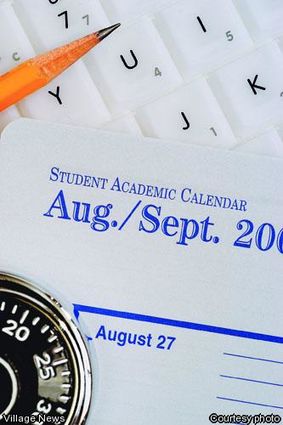 Students enrolled in the Fallbrook elementary and high school districts may find their 2008-2009 schedules simplified as both districts seek to align their academic calendars.

At the elementary school district, Assistant Superintendent Dr. Brian Jacobs is presently considering adhering to the 2007-2008 schedule for the upcoming school session but has met with Jim Yahr, assistant superintendent at the high school, to discuss making the two calendars more compatible.

“My obligation is taking the lead from my board,” Jacobs says, which involves considering the impact on collective bargaining, such as how it might affect teachers and classified staff, and meeting traditional family vacation and holiday times, but most importantly how a change in the calendar might impact “high-stakes testing windows.”

At Fallbrook High School, parents, teachers, classified staff and administrators formed a ‘calendar committee’ that met prior to winter break to evaluate possibilities and will continue discussing the issue this week.

Although no committee exists for the elementary district, their school site councils will add input as Jacobs rounds out his research.

“Some of the key elements to look at are where the testing windows fall, such as STAR,” says Jim Yahr.

The Standardized Testing and Reporting (STAR) program permits a 21-day window comprised of the 10 days before and 10 days after the day on which 85 percent of the instructional year is completed. Testing must be completed within the 21-day window.

All students enrolled in California schools participate in STAR testing.

Further, adds Jacobs, for grades nine through 12, “Springtime is inundated with testing come March, April and May” as high school students take pre-SAT and AP tests.

D.J. Campe, who is on the high school calendar committee and has children enrolled in the elementary school district and Fallbrook High School, claims several issues impact aligning the calendars for high school students.

“STAR testing and AP testing are colliding; [they’re] too close to each other,” Campe says.

By the time the approximately 500 high school AP students work to get advanced placement, “the wind is all out of their sails,” he adds.

As a result, Campe says these students have been known to lower scores by randomly marking answers on the STAR test without considering the questions and, in some cases, doodle on the test papers.

Another issue involves the timing of the tests. By starting the school year earlier, as they did this year, students are supposed to be prepared to take finals prior to winter break.

Because many students leave the country during winter break and often do not return until after classes resume, taking the tests before the break means more students will be tested, thereby providing more accurate school scores.

By January 14, Campe says high school administrators will know if testing prior to winter break was successful.

Bosch also has children enrolled in both the elementary and high school districts and adds another concern about the high school calendar and first semester finals prior to winter break: “[The] first semester is three weeks shorter than second semester.”

Bosch points out that a teacher must condense course information for the first semester, then draw it out for the second semester because semester weeks are uneven.

As a result, students enrolled in the second semester course have a longer time period to absorb the information before a test, thereby learning it, while those taking the same course first semester may have to memorize information prior to a test.

To prove her point, Bosch says the number one ranked high school in the nation, Thomas Jefferson in Alexandria, VA, takes finals after winter break. Moreover, she says according to the Coalition for Traditional Calendar, kids do better if they learn something, take a breather, then test, proving it is retention rather than regurgitation.

Bosch is also concerned about the impact of an early start calendar on family vacation timing and the cost to the district for air conditioning classrooms in August.

While aligning the calendars may make it easier on parents whose students attend schools in both districts, there will always be inconsistencies. For example, Campe says he spoke to a track coach who told him coaches were thinking of putting together a CIF track meet over spring break but couldn’t do it because all the schools are on different schedules.

Regardless of the outcome, Campe says, “I’m on the side of what is best for the students. It’s not the school district’s job to accommodate me. It’s their job to educate my kids.”

Jacobs says depending on the decision of the elementary school board, their calendar for the 2008-2009 year will essentially remain unchanged. Yahr projects a decision on the high school calendar by next month.