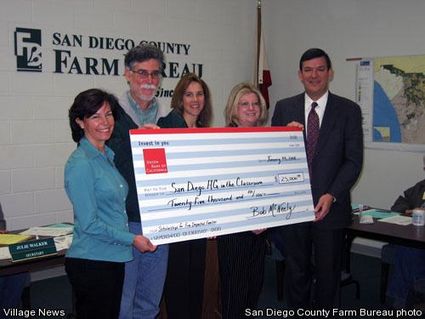 ESCONDIDO — The Union Bank of California Foundation, a nonprofit public benefit corporation, recently presented San Diego Ag in the Classroom with a $25,000 grant to help the children of farmers and farm workers who were impacted by the devastating October wildfires that swept through San Diego County.

The funds will be used over the next five years to award scholarships to those students of farm families who are entering or attending a two- or four-year college or university with any declared or undeclared major.

“Although the impact of the October 2007 wildfires have been felt by many in the county, we found that it was the rural areas and farmers that were disproportionately affected,” said Janet Silva Kister, San Diego Ag in the Classroom’s scholarship chair. “Unfortunately, many farmers lost their farms and their major source of income. In many of these cases, it will be three to five years before the replanting process will return income to them again.

“In addition, unlike storefront businesses and homeowners, farm losses from a fire are almost all uninsurable. So this grant is a great opportunity to help our agriculture community recover from this crisis.”

The scholarship application and eligibility information are available at http://www.sdfarmbureau.org.

San Diego Ag in the Classroom is the educational arm of the San Diego County Farm Bureau, a nonprofit trade organization with more than 7,000 members.