Pain in the back can become chronic 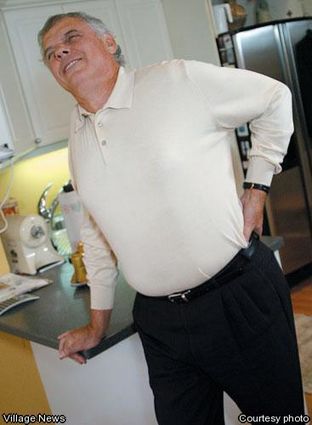 Few ailments can have as negative an impact on a person’s daily life as lower back pain.

Because the lower back connects the upper and lower body, it bears most of the body’s weight. This makes it extremely difficult to get around and do the things we tend to take for granted when the lower back is hurting.

Because of the role it plays, the lower back is often the part of the back that most people hurt. Sooner or later, nearly everyone hurts their lower back, either mildly or severely.

More often than not, people hurt their lower back when lifting something improperly, reaching for something or if they suddenly twist their back. Other factors can lead to or extend lower back pain as well.

It’s no secret that as we age our bodies become more susceptible to injury, and the back is no exception. Vertebrae tend to wear down as a person ages.

This isn’t good, because vertebrae are responsible for providing cushioning between the bones of the back. If one of these vertebrae bulges (i.e., bulging disc), it can put pressure on the nerves, causing a sharp pain in the back.

Unfortunately, for lots of people lower back pain is an ongoing concern. That’s because they have conditions such as arthritis that make them especially susceptible to lower back pain.

In addition, people who have been in car accidents where they’ve hurt their back may find that lower back pain becomes a regular concern.

Lower back pain, studies have shown, is more likely to become chronic in people who are under a great deal of stress or those suffering from depression.

While chiropractors can work wonders, there are several steps you can do on your own that should help relieve your pain.

• Combine ice and heat treatment: After initially hurting your back, apply ice for the first two to three days, doing so for periods of five to 15 minutes every two or three hours. After those initial three days, switch from ice to heat. Apply a heating pad or take a hot shower using the same guidelines with which you applied the ice.

• Don’t overdo it with rest: It’s important to attempt to get back to your normal routine within a couple of days of hurting your back. When you spend too much time lying in bed or on the couch, you run the risk of making the problem worse by weakening the muscles even further. While it’s going to be hard to get back into your daily routine, you can take over-the-counter pain relievers to help ease the pain.