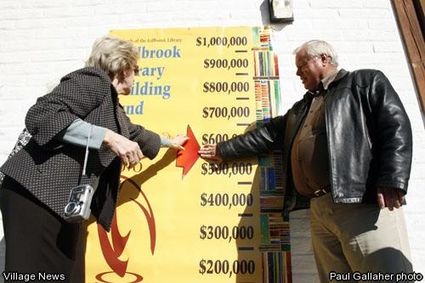 Friends of the Library president Jerri Patchett (left) and San Diego County Supervisor Bill Horn place an arrow on a large graph to indicate the amount of money that has been raised to date at a short gathering held January 18 to kick off the final fundraising drive for the new Fallbrook library building.

“Supervisor Horn has given us $500,000 to help us raise a million dollars for the project,” said Patchett.

To date, Horn has provided $1,067,958 out of his discretionary District 5 community projects fund for the project. He has also assisted in obtaining funds from the County’s capital outlay fund.

A strong supporter of libraries, Horn has aided in the building of five new libraries in North San Diego County and looks forward to bringing number six to Fallbrook.

The supervisor has pledged that “a new library will be built in Fallbrook.”

Between the Friends of the Fallbrook Library and the County, about half of the funds needed have been secured. The remaining funds are expected to be provided through a combination of additional county funds, private donations and grant money.

Horn made a grant of $500,000 available to the Friends organization if they can raise the same amount in matching funds through donations from the community.

Patchett said the Friends organization has raised almost $2 million over the years for the project, and they have a good start on the new challenge at hand. “We’ve already got $70,000 toward [the grant],” she said.

The project, Patchett explained, will be “more than just a new library, it will be the cultural center of town.”

“This is going to be the most important building in Fallbrook – the library and cultural center,” Patchett said. “We will have art shows, musical performances and a meeting room. We will more than double our computer access and have wireless availability after-hours.”

Patchett went on to explain that a Fallbrook Library Selection Committee has been formed for the purpose of selecting the design build team that will build the new facility.

Patchett serves on the committee and the Friends’ other spot is held by retired architect Ron Miller. Patchett and Miller are both members of the Friends of the Fallbrook Library Building Task Force.

“The [design build] proposal will be brought back to the community for input,” Patchett said. “It’s very important that members of the community have their opportunity to give their input because the people of Fallbrook have a vested interest in this project.”

Patchett also said that the committee will continue working with the selected design build team throughout the project.

Patchett said banners tracking the progress of the $1 million fundraising goal will be on display at both Major Market and the Fallbrook Library for community members to watch and be involved in.

In addition, she said there are various charitable giving levels that offer naming opportunities within the new facility.

“Individuals who have given in the past will also be counted toward naming opportunities for the new library,” she added.

The Friends organization is planning a gala event/annual luncheon and fundraiser that will take place April 24 at Pala Mesa Resort and include many different levels of participation for community members and guests.

At the luncheon, Patchett’s daughter, Ann, an award-winning author who has written seven books, will fly in from Nashville to serve as guest speaker. 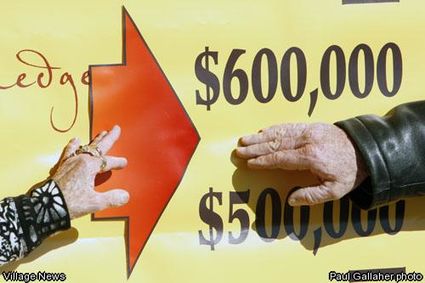 The hands of Arlyne Ingold (left), honorary chair of the Fallbrook Library Building Fund Campaign, and Supervisor Horn indicate that $570,000 has been secured toward the current $1 million goal.

Ann Patchett’s book “Run” has been selected as Fallbrook’s 2008 Community Read. Her other works include “Truth & Beauty,” “Bel Canto,” “The Magician’s Assistant,” “Taft” and “The Patron Saint of Liars.”

The Fallbrook Library, established in 1913, is the oldest in the county and has more than 26,000 cardholders in the area.

The Friends of the Fallbrook Library operate the Bottom Shelf Bookstore, located on the lower level of the library building, at 124 South Mission Road. At the store, they offer quality used books and more at thrift store prices.

Members of the community wishing to make a donation to the new library fund may do so there or by mailing it to: Friends of the Fallbrook Library, PO Box 2586, Fallbrook, CA 92088.