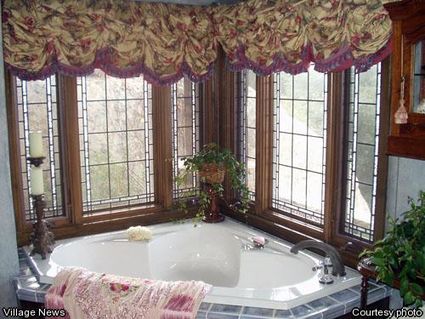 Buck Gerlach has been putting his artistic talent into custom stained glass creations for the last 30 years. “Creating original artwork and seeing it materialize into completion is a gratifying process,” he said.

A 28-year resident of Fallbrook, Gerlach now works out of his home-based studio in Valley Center, where he moved a year and a half ago.

Perhaps one of the most unique things about Gerlach’s stained glass is that it can be found in a variety of environments, from simple country homes to elaborate gift items treasured by global personalities.

One particular gift that Gerlach had a hand in was a specially commissioned piece for Pope John Paul II in 1987. After creating the piece, Gerlach was invited to the special event where the Pope was going to be presented with the gift.

“It was an event where seven different religions came together and it was held at the Japanese Cultural Center in Los Angeles,” Gerlach said. “It was really high security. There were snipers on the roof and helicopters all around. I happened to get a seat in the front row, 15 feet away from the Pope. It was a pretty spectacular event.”

In appreciation of his work for the Pope, Gerlach was presented with a gold medallion.

Gerlach was also commissioned to make a special stained glass window for astronaut Pete Conrad, the third man on the moon.

“I was commissioned by his wife to make a window for Pete,” Gerlach explained. “It was a moonscape picture of what the moon looks like out the window of the space shuttle. It was a sandblasted piece [etched glass instead of stained] that went behind the bar. The next day she called and said he loved it; he said it looked exactly like what he saw out of his space shuttle.”

Whether he is working on a design for entry doors to a home, a stained glass window for a bathroom or something for celebrity, Gerlach puts the same creativity and attention to detail into each piece. Prices vary depending on the complexity of the job.

Originally educated in architecture, Gerlach said it was a stained glass art class that fed his interest in the craft.

“I picked it up as a hobby and pretty soon had enough orders to make it a full-time job,” he said.

The process and techniques Gerlach uses are very close to the same as the stained glass artists of the 13th Century.

In the Medieval days, stained glass was used to illustrate Bible stories to people who couldn’t read. However, glass artists had to make their own colored glass. That’s where the term “stained” glass comes from.

The process starts with 99 percent sand. Then it is melted down to the consistency of honey and chemicals are added for color.

When asked if he makes his own glass, Gerlach said “no” because it would be too costly.

“You have to leave the furnaces burning all the time or else the glass hardens up and ruins your oven,” he explained.

One of the great innovators of stained glass color was Luis Tiffany. Many will recognize the name of his family’s jewelry store – Tiffany’s. 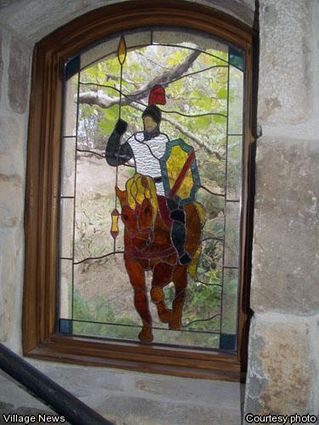 A medieval knight watches over an entryway from one of Gerlach

At the turn of the century, when Luis was 18 years old, his father gave him $2 million to start a jewelry store, but he wanted to make glass. He ended up becoming a world famous designer whose specialty was creating new colors.

Being an introvert, it was reported, Luis would sit for hours experimenting with different techniques. He never wrote anything down, so nothing very specific is known of his processes.

For Buck Gerlach, the art of stained glass can be incorporated into jobs of all sizes, small or large, modest or extravagant. In the Fallbrook area, many of his designs can be found in the entryways of homes as well as in cabinet glass, bathroom windows, over garden tubs and more.