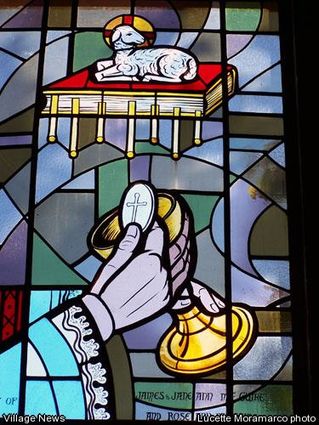 Last week, the old youth center behind St. Peter’s Catholic Church on Stage Coach Lane was demolished in the first physical step toward the construction of a new church building.

The building process was put into motion in 2002 when St. Peter’s paid off the loans for its education center which opened in 2000. Church leaders immediately started a new building campaign.

The building plan includes a plaza area between the current church, the parish hall and the new church. (This includes the area where the youth center used to be.)

The new church, two and a half times bigger than the old one, will stand on the current parking lot and there will be a new parking lot beyond the church at the east end of the property.

The estimated cost of the project is $8.4 million. Ninety-five percent of the funds will come from parishioners through individual pledges and bequests. The remaining amount is coming from small fundraisers put on by various parish groups.

“The Diocese of San Diego requires one-third of the total cost to be in the bank before a parish can proceed [with construction],” said Father Bud Kaicher, St. Peter’s pastor.

He explained that the “bank” is a trust and loan fund managed by the Diocese that its parishes and schools put their money into when they are saving for construction projects.

Once that one-third amount has been spent on construction, St. Peter’s will take out both a short-term and a long-term loan, from the diocesan trust and loan fund, to be paid off within 20 years.

At the same time, Father Kaicher added, the church will still be receiving pledge installments from parishioners which will be used as payments on the loans.

The Diocese actually approved St. Peter’s project to begin construction in February 2007. Six days later, however, the Diocese filed for Chapter 11 Bankruptcy in the wake of the sexual abuse lawsuits against it and the project was frozen.

While the judge on the bankruptcy case allowed projects already in the building stage to continue, St. Peter’s was the only parish whose project had been approved but had not actually started building. The judge agreed to individually hear this one case in September.

By that time, the Diocese settled the lawsuits and by late October had withdrawn from the bankruptcy proceedings. In November, St. Peter’s was allowed to rebid their construction project.

Keeping the original contractor, they accepted new bids from the subcontractors who gave a guaranteed maximum price that was $300,000 less than the total given the previous February.

While the decreased cost was good news, the delay in using their grading permit has led to a scheduling problem with completion of the new parking lot. Father Kaicher said that from mid-February to June there will be little parking available, which means he will be increasing the number of Masses on the weekends to reduce the number of people needing parking at any one time.

Construction of the church itself is planned to begin in mid-late April this year.

The whole project is expected to take 16 months to complete with the new church being dedicated in either late April or early May 2009. By then Mass will have been regularly celebrated in Fallbrook for 65 years.

According to the church’s Web site, local Catholics began attending Mass in a housing project for Navy personnel in 1944 and later moved Mass to the Mission Theater.

The first church building was constructed on Fig Street in 1949 with financial help from the Catholic Church Extension Society, which requested that it be called St. Peter’s.

The parish outgrew that building by 1960 and the present 400-seat church was built in the early 1960s for $150,000. It was the first church on Stage Coach Lane. Longtime parishioner Bill Karnauskas estimates that there were around 100 families attending the church at that time.

More than 40 years later, the parish has grown to include 2,097 registered families (which conservatively equals at least 4, 823 parishioners).

While the church’s staff has grown to 18 people (plus 20 employees between the school and preschool), Father Kaicher is the only full-time priest serving the parish. While he is helped on weekends by retired and visiting priests, right now he has no associate pastor to help with daily duties.

Together with the decline in available priests, the growing number of Catholics in Fallbrook has made a bigger church necessary.

Father Kaicher explained that the shortage of priests means that he and future pastors will have to provide Mass for more people with less help. With the bigger church, which will seat 995, the parish will be able to accommodate more churchgoers with fewer Masses.

There will also be more parking available and more meeting spaces so that multiple groups can have meetings and events going on at the same time on the property without getting in each other’s way.

The new church will be very different from the current one, which will be a big change for all of the parishioners but especially for those who have been there since the current church was built.

From Karnauskas’ point of view (he’s been a member of the parish for more than 50 years), the difference in the parish between now and earlier years is that “people are very involved now; before it was just the priest [taking care of the parish].”

He also said that there is more going on now in the parish than before.

Karnauskas then pointed out that the new church’s benefits for parishioners will extend beyond giving them more room for their activities: “There are many who attend Mass and leave without talking to anyone. The church will have a greeting area for people to talk in after Mass.”

Combined with the extra time between Masses (due to fewer being offered), he feels that this new gathering space “will bring people together.”

The last phase of new construction will be a row of offices on the south side of the church which have been approved but will be built separately.

As for the current church building, Father Kaicher said that as soon as possible after the new church’s dedication, a simple interior remodel will be done on the old one to convert it into a youth center/gymnasium to be used by St. Peter’s school and youth program. 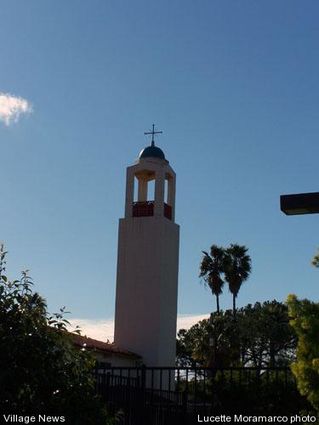 It will include a basketball court with room for volleyball and indoor soccer as well as a stage for performances and more offices. Father Kaicher offered that “the whole community can use it.”

Just as the parish community has grown and changed over the last 45 years, St. Peter’s facilities have also grown and changed. Besides the first hall (that was turned into classrooms, which then became the youth center that was torn down last week), additions include the present hall, a new rectory, the education center, a preschool and daycare center and now a new church.

After years of planning and some last-minute delays, the sounds of demolition marked the newest phase of growth for a church that is always preparing for the future needs of its parish.