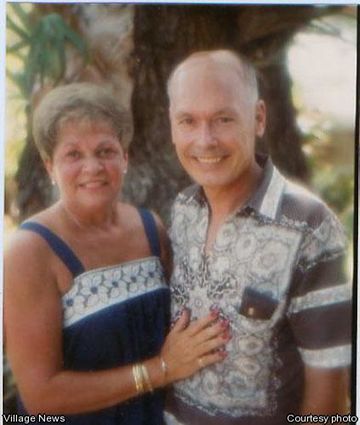 Hamilton “Bill” Temple III, 82, passed away January 19, 2008, his hand held by his granddaughter as he peacefully slipped away.

Born May 2, 1925, in Covina, CA, to Anna Scofield Temple and Hamilton Temple II, Bill was a veteran of the Army and served his country well.

He was a private pilot who flew for years enjoying the open sky. He lived on the family ranch in Fallbrook, CA, since 1947.

Bill is survived by wife Barbara, granddaughter Lisa and great-granddaughters Taylor and Kaytlin.

J. Barbara Temple, 78, passed away Sunday, February 3, 2008, in the presence of her granddaughter at home on the family ranch.

Born December 28, 1929, in Massachusetts to Nickolas and Blanche Fuller Pignone, Barbara was married to Anthony Valente, who preceded her in death in the Vietnam War and son Michael passing in 2004. Husband Hamilton “Bill” Temple III passed away on January 19, 2008.

Barbara, in her monogram clothes and Reebok tennis shoes, spent years working for many different businesses in Fallbrook, always with her red hair and a smile. She made her home on the family ranch in Fallbrook, marrying husband Bill in 1969.

Her granddaughter Lisa, great-granddaughters Taylor and Kaytlin and sister Ann, plus her close friends, will miss her. Special thanks go to Trish, her caregiver – you made her last days more comfortable.

In lieu of flowers, donations may be made to Fallbrook Hospice. A private memorial will be held at a later date.