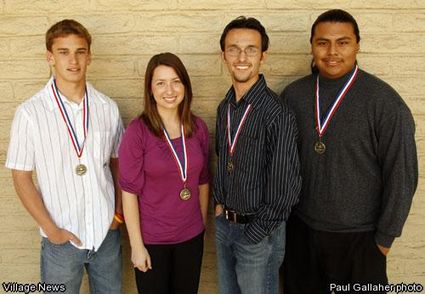 Fallbrook Community Students of the Month for February 2008 are (from left) Bret Hasvold, Liz Green, Nick Korean and Jerry Gonzales.

Liz Green, Bret Hasvold and Nick Korean of Fallbrook High School and Jerry Gonzales of Ivy High School were honored as Fallbrook Community Students of the Month for their accomplishments at a special breakfast event held February 7 at Fallbrook Golf Club’s Hukilau Restaurant.

“This is the highlight of the month,” said Lisa Broomfield,

principal of Ivy High School. Other educators in attendance agreed, with English teacher Connie Fellios adding, “These students inspire us.”

Emcee Sue Johnson introduced each of the award recipients and acknowledged members of the business and service community who joined in the celebratory event. Frank Larkin and Carl Fekete of American Legion Post 365 gifted each student with a keepsake medal in recognition of the honor.

Liz Green was recognized as a Student of the Month after being recommended by Fallbrook High School field hockey coach Kathy Waite.