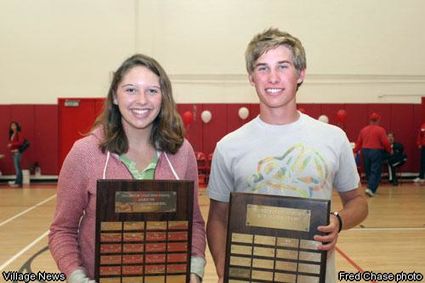 “I am truly honored and blessed to be a part of a group of guys I have grown up watching,” Vandivort said of joining the school’s list of Outstanding Senior Boy award-winners.

Vandivort said he had always admired the older students who were good role models around the school.

A student who has gotten involved in school, community and global causes, Vandivort has a passion to help humanity, reflected in the fact that he founded Invisible Children, part of Fallbrook High’s Schools for Schools program, last spring.

Together with Warriors for Christ, the program raised more than $15,000 for children in Africa last year.

Vandivort has traveled overseas to Uganda to do volunteer work and founded a boys’ Bible study group in 2006 at Fallbrook Presbyterian Church.

A four-year member of the Fallbrook High baseball team who both pitches and plays the infield, Vandivort was the recipient of the Cy Young Award last year.

As his senior year unfolds, Vandivort says he finds new things to appreciate every day.

“Watching what the Lord is doing through me and my friends, seeing what the future brings, that’s what I find amazing,” he said.

With hopes of attending the University of Southern California next year, Vandivort says he hasn’t determined what his major will be yet, but one thing is for sure: Fallbrook has made its mark in this young man’s memory.

“What I like is the sense of community and comfort you have in a small town,” he said.

Kevin Vandivort is the son of Greg and Laura Vandivort.

“I am so surprised; I was not expecting this,” Maratsos said. “My cousin plays on the [El Camino] basketball team, so I just thought I was coming to the game to see him play against my school.”

Gary Vix, brother of Jackie Vix, for whom the Outstanding Senior Girl award is named, was on hand at the event to present Maratsos with the 2008 award.

Maratsos has been heavily involved in Future Farmers of America and the Fallbrook High Marching Band all four years of high school, including stints in the concert and jazz bands.

She also plays a significant role as a community volunteer in Fallbrook. Giving her time to the Fallbrook Land Conservancy and Annual Relay for Life (cancer fundraising effort), Maratsos is a multifaceted individual.

In addition to being a member of the California Scholastic Federation, Maratsos’ academic achievements have earned her a place on the school’s Academic Decathlon Honors Team.

A familiar face around the high school, Maratsos serves as a newscaster on the school’s morning news program. One of her greatest joys, she says, has been meeting the newest people on campus. 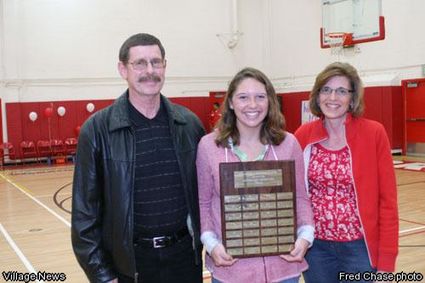 “I have really enjoyed meeting the new freshmen and getting to know them,” Maratsos said. “I have developed relationships that have been very rewarding.”

With plans to attend Cal Poly San Luis Obispo in the fall, Maratsos said she will study agricultural education in college but never forget her Fallbrook friends.

“The people I have met at Fallbrook High have been spectacular, and diverse,” she said.

Maggie Maratsos is the daughter of Putnam and Beth Cook.