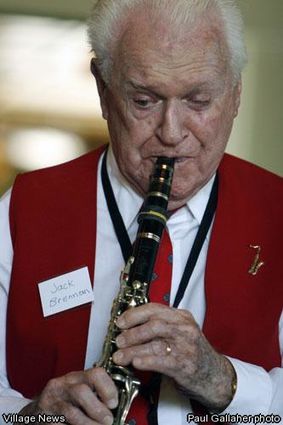 There was nothing ordinary about February’s scheduled monthly meeting of the Fallbrook Branch of the California Retired Teachers Association (CRTA).

After a brunch at Hukilau and a brief business meeting that included the announcement that the group had taken the “People’s Choice” award at the Fallbrook Christmas Parade, the teachers launched a delightful talent show featuring their own members.

Patrons in other sections of the Fallbrook Golf Club were also pleased with the show and conveyed this message to the performers.

The first act was a musical medley by Bud Roberds on the piano, Jack Brennan on the clarinet and Leona Sears on vocals. Sears, with her lustrous, rich voice, sang “When I Fall in Love” as well as other tunes. She was a music instructor and had once sung at Carnegie Hall.

Genevieve Sparks, who is one of the three founders of the local CRTA group and served as president, read a clever fairytale play on words called “Prinderella and the Cince.”

Ford, who was married in Norway, taught for years at San Onofre School. Reeder and Grossman are both past presidents of CRTA who have each served multiple terms.

Genie Summers, who is active in the Fallbrook Music Society, put her talents to work at the other end of the spectrum with a uniquely delightful group called the “Mountain Singers.”

These women, clad in classic “hillbilly” garb, played tunes on a washboard, among other hill country “musical” devices. One woman made music with a wooden spoon and a tin bucket and another made a slightly different sound by tapping a broom at the bottom of a bucket.

A piano solo was performed by Jean Dixon, a virtuoso pianist who plays with the Fallbrook Chorale. Dixon played an amazing rendition of “Maple Leaf Rag.”

Bud Roberds, who has been well known in Fallbrook music circles for a long time, taught at Fallbrook High for more than twenty years. Now retired, he still plays piano in restaurants.

Roberds told a story of a patron in one of the restaurants who kept requesting songs such as Beethoven’s “Für Elise” that either he didn’t know by heart or were not arranged for piano. Finally, the persistent requester found one Roberds could play – “Alley Cat.”

Artist Jack Ragland and his wife, Marilee, who taught in Fallbrook for twenty-one years, entertained with a whimsical song and dance routine, “Seaside Retreat,” which was reminiscent of the early 1900s. The Raglands were dressed in the frilly beach garb of that era. 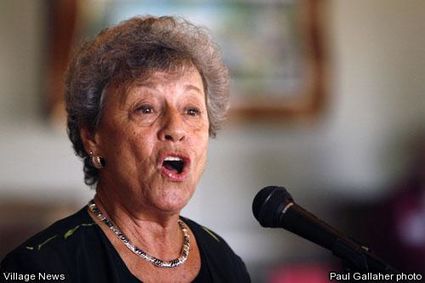 Jo Griset, who taught at Vallecitos School for many years, kept the audience’s attention with a playful and animated account of the “Three Billy Goats Gruff.”

After the concert Sears and her band distributed kazoos to the audience, then announced, “If you want to kazoo – do!” The audience first faltered a bit trying to blow on the kazoos, then were told by Sears to “hum, not blow,” and it worked.

The buzzing sound of a roomful of these peculiar musical instruments was a fitting finale to a wonderful show.