A blue door, a glass of wine and thou : The story of the Jacksons' wine cave 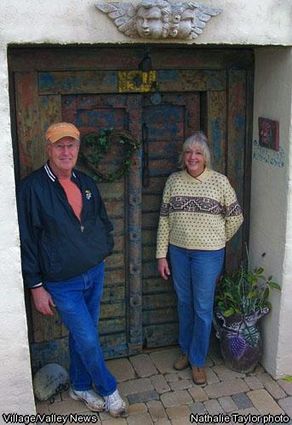 Bill and Colleen Jackson pause at their wine cave door.

“...Mr. Tulkinghorn sits at one of the open windows, enjoying a bottle of old port… He has a priceless bin of port in some artful cellar under the Fields… he descends with a candle to the echoing regions below the deserted mansion…”

Bill and Colleen Jackson have a place where they can descend, like Mr. Tulkinghorn, with a candle to the echoing regions below their front yard in Fallbrook.

The couple has built a unique wine cave, which they recently celebrated with a cave-blessing event. Forty guests “popped the corks on thirty bottles of wine,” according to Colleen.

The couple has named their cave, as well as their upcoming private label, “Frutta di Luna,” which is Italian for “Fruit of the Moon.” Fallbrook Winery will bottle the wine when the grapes are ready next year for the first harvest.

Bill and Colleen were married eighteen months ago near Florence, Italy, in a castle once owned by the Medici family.

Inspiration from that region of Italy spurred them on to plant a vineyard. The question of wine bottle storage inspired them to dig a wine cave.

The cave was built around an intricately carved blue-hued antique door that Bill thinks could be from India or Turkey. The original blue paint is chipping to reveal the rough wood underneath. A stone angel rests on the capstone guarding the entrance.

Bill had given Colleen a “House Blessing” cross that is a traditional gift in certain Latin American countries. Colleen wasn’t sure where to hang it, but Bill told her, “When it is time, you will know.”

After the exterior of the wine cave was completed, Colleen hung the metal cross in a place of honor in the center of the blue door.

Bill and Colleen built the cave exterior with Spanish flair to resemble something that might have been found in the Fallbrook area 200 years ago.

The interior is a mingling of Spanish and Italian to complement the Frutta di Luna theme.

The Jacksons commissioned a painting for the back wall, which is a rendering of the exterior, but painted to mimic what the area may have looked like in the 18th Century. Rays of silver light from a full moon shine on the cave facade while an angel rests on the capstone.

The interior glows with candlelight and subtle track lighting. An extensive collection of wine that Bill has collected at auctions and wine festivals is housed along the wall.

This year the Jacksons will be presented the first bottles from the 400 Syrah vines growing in their vineyard. The Syrah is a dark grape which originated in France’s Rhône region.

Niches are filled with terra-cotta wine jars and the cave’s tables can accommodate about twelve guests. However, the space is large enough for forty standing guests to clink glasses comfortably.

At first glance, the ceiling with its faux knotholes looks like wood, but upon closer inspection one can tell that it is an artfully painted slab of concrete. To create an even more authentic look, Bill sawed off the heads of bolts and glued them to the faux wood beam.

“The cave was going to be square, but we decided to curve the walls to make it look softer,” Bill noted.

“All the contractors involved had a good time doing it and got really creative,” Colleen added.

After the cave was built, painters were brought in to give the concrete a dose of character.

The cave now exudes character from every corner. The painters were adept at faux painting techniques that took six days to complete. They applied a light terra-cotta hue, then stenciled designs in various places.

Plaster was applied and then chipped off to give it a weathered and aged appearance. Wax was then slathered on to create even more faux weathering. 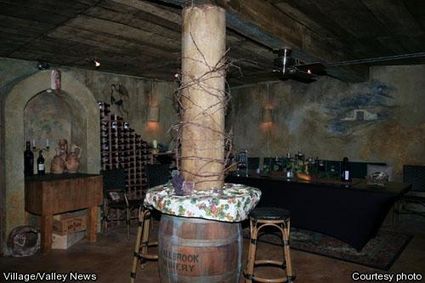 The wine cave interior with its Spanish and Italian influences.

One corner was painted to look like it had leaked. The discoloration appeared so authentic that even the contractor was fooled.

The painters did their job so adeptly that when I viewed the faux aged walls and inhaled the cool wine-scented air I was transported in my mind to some ancient Tuscan wine cave.

The Jacksons are a couple who have taken a dream and seen it come to fruition. They sealed their dream with a cork from their wedding wine, which was spilt in half, then embedded in the cave wall.

Visitors to Frutta di Luna will inhale the ambiance and experience a touch of Spain, a dash of Mexico and a delightful sprinkling of Italy.