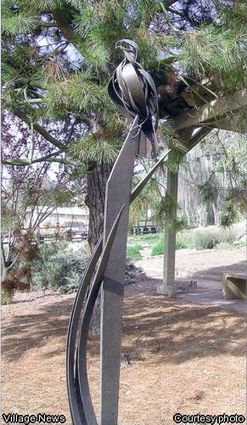 Sheriff’s Detective Daniel Leibach recently reported that pieces of a bronze sculpture of a hawk that was stolen from Palomares House and Park were found at an Oceanside metal recycling center.

Officers paid a visit to Ben Recycle Center after questioning some individuals who reside at a home on McDonald Road in Fallbrook.

“Detective Jim Pucillo and I went over to a house on McDonald Street where we thought [the sculpture] might be,” Leibach said. “Someone <at the house> said they had heard through the grapevine that the sculpture had been cut into one-foot pieces and sold for scrap.”

A receipt issued by Ben Recycle Center disclosed the name of the individual who was paid for the metal.

“Shawn Salley, 38, a resident of the Riverside area, is being sought for questioning in the case,” Leibach said.

While the piece of art was originally donated to the facility by local philanthropist and community volunteer Vince Ross at a cost of $16,000, it was scrapped for a small fraction of that.

“The receipt issued was for approximately 110 pounds of bronze and he was paid $198 for it,” Leibach said.

In its original form, the piece stood between five and six feet tall, with the image of the hawk comprising about two feet of that.

Leibach said that although the sculpture was dismantled, it was still possible to identify it.

Mike Peters, preserve manager for the Fallbrook Land Conservancy, was called by the Sheriff’s Department to make a positive identification based on the pieces recovered.

Peters says the damage to the sculpture makes reassembly impossible.

Anyone with information on the whereabouts of Shawn Salley is asked to call Detective Leibach at (760) 451-3110.