Fortin leaves Italy at 17 for life in America 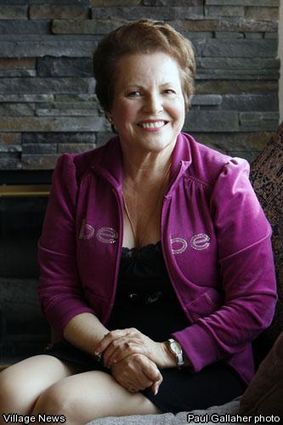 As you walk across the threshold of Nina Fortin’s home, a multitude of photographs that adorns the walls and tabletops catches the eye and reveals the story of her life.

When Fortin was a young girl living in Pissiano, Italy, little did she know that on her wedding day, LIFE Magazine would be there to cover the event.

“I have no idea how LIFE Magazine found out about the marriage,” she said. “Nobody knew.”

Not only did her small town congregate for the ceremony, but throngs of people out of town attended.

Her marriage in 1951 was followed closely by members of the international print media, due to the love of romance during this era. Fortin married an American soldier named George, whom she had met during World War II.

After their friendly encounter, letters were exchanged with the aid of people who could write in the recipient’s native language. This went on for a handful of years.

“I married George the day before I turned 17,” said Fortin. At the time of their marriage, her husband was 32 years old.

Fortin admits that leaving Pissiano was extremely difficult. She left her father behind, as well as four sisters, who she was raising after her mother passed away.

“I didn’t want to leave my four sisters,” explained Fortin.

When Fortin married and arrived in the United States, she lived in New Bedford, MA.

“Two weeks after I moved, I worked in the factories,” said Fortin. “Life was very hard.”

Because of the war, Fortin’s education stopped at the second grade. Educating herself in the English language was a struggle.

But thanks to television, Fortin learned the language by watching shows like “I Love Lucy,” “Hopalong Cassidy” and “The Roy Rogers Show.”

Upon learning more about the language and the culture, Fortin became a citizen of the United States.

Five years after moving to the US, Fortin and her husband moved to California, where they settled and raised their three children in Diamond Bar.

Fortin was a receptionist at a real estate office, where her job responsibilities grew. One day, her boss recommended that she get her real estate license.

Apprehensive because she did not know how to read English well, Fortin was still determined to attend the class. However, she stumbled when it was time to take the state real estate license exam.

“I didn’t pass the first two times,” she said. “I knew the material, but I was running out of time; I just wasn’t reading fast enough.”

“He wrote a letter to the state board telling them that because of my language barrier and blood disease, they should give me more time for the test,” said Fortin. “I ended up getting an extra 20 minutes on the test and I passed – I was in such happy shock!”

Being a go-getter, Fortin didn’t stop there: “Two years later I got my broker’s license.”

“I loved real estate,” she said.

When Fortin looks back at her life, she realizes that it has been a mixture of happiness and pain. Yet through it all, she learned to never give up.

Her faith in God has also been unwavering. “I’ve always prayed to Him for guidance and direction,” said Fortin.