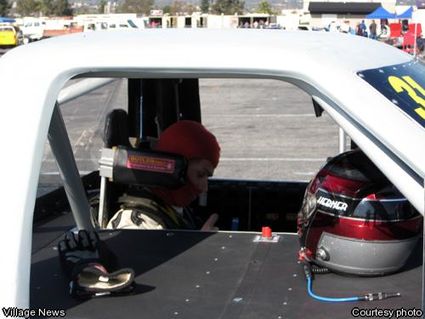 Grant Hebner will be competing at Irwindale Speedway in the 2008 “King Taco” Super Truck series. Hebner has signed on for the full race season with Kevin and Jason Bowles championing the #31 Chevy Super Truck.

The “King Taco” Super Truck series is a 14-race series held on Saturday nights beginning in March and ending with a 100-lap race in October. All the races are held at Irwindale Speedway, located15 miles from downtown Los Angeles on the 605 freeway just south of the 210. Each race is preceded with a Friday night practice session.

Irwindale Speedway is a state-of-the-art motorsports complex that features a 6,000-seat grandstand and twin one-half- and one-third-mile oval race tracks that are paved and banked.

“If you’re a race fan, you owe it to yourself to check out the action at Irwindale on any given Saturday night,” said Hebner. “There’s a lot of great racing going on year round, close to home, and at a very affordable price.”

Hebner’s race schedule, along with links to Irwindale Speedway, can be viewed on his Web site, http://www.GrantHebnerRacing.com.

“We are always looking for sponsors who could benefit from an association with NASCAR racing at the regional level,” said Hebner. “If you’re interested in becoming involved with the program, all our contact info can be found on the Web site.”