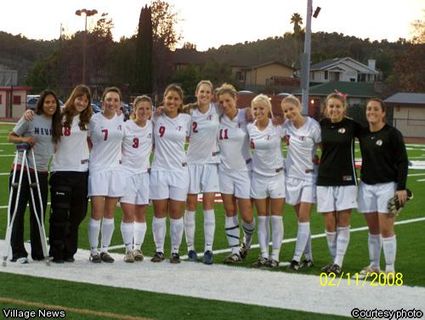 FALLBROOK — On Monday evening, February 11, the Fallbrook High School varsity girls soccer team honored the 11 talented seniors who have been part of the program while at the same time facing a must-win game against Carlsbad.

Both teams were in contention for the Avocado League title, with Fallbrook’s record of 6-1-1 and Carlsbad’s 6-0-2 on the line. The winner would clinch the title with only one game left to play in the league.

Each senior was called out individually before the start of the game and stood with her parents as one of their former teammates, Jordan Toppin, read a short bio on each talented girl. All are college-bound.

Seven of the girls have accepted scholarships and signed with schools to continue playing soccer and one has signed for field hockey. Devon Holman will play field hockey for Stanford.

Fallbrook went on to win 2-1 in a well-fought battle against Carlsbad. Two days later, they secured the Avocado League Title in a 3-0 win over El Camino.

• Kathleen Mellano (F) will play either soccer or field hockey

• Natalie Ratnavira (MF) will play for U of Nevada, Reno