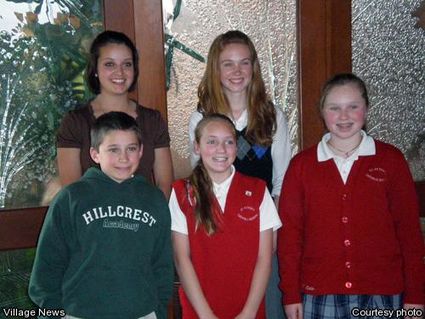 FALLBROOK — At a recent meeting of the Monserate Chapter of the Daughters of the American Revolution (DAR), winners of the organization’s American History Essay Contest were honored.

Each student read his or her essay on the topic “I Spy: Espionage during the American Revolution.”

At the same meeting, the Good Citizenship award and medal was presented to Kathryn Brooke Wojdynski of Fallbrook High School.

The Good Citizenship winner was selected based on an essay of no more than 500 words. Wojdynski was chosen by Fallbrook High School Associated Student Body Director Josh Way.

The students in the American History Essay Contest were to imagine what it might have been like to be a spy during the American Revolution, to pretend they were either a loyalist or patriot and discuss their lives as spies.

They were to relate why they chose to become spies, detail some of their experiences during the war and tell the consequences brought about as results of their actions, both to them personally and to the war in general.

The contest was open to fifth, sixth, seventh and eighth grade students in public, private or parochial schools or those who are home-schooled.

Judging was based on historical accuracy, adherence to topic, organization of material, interest, originality, spelling, grammar, punctuation and neatness.

Each winning student received a medal, certificate and cash prize.

The contest is held every year and the topic changes annually.