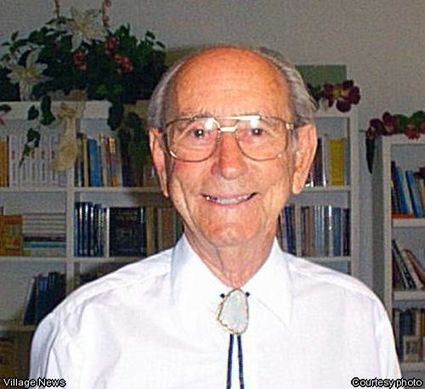 Howard Grant passed away on February 28, 2008, at Fallbrook Hospital. He was a resident of Silvergate Retirement Residence in Fallbrook. He was born March 17, 1919, in Wasco, CA, and took pleasure in reminding everyone that was St. Patrick’s Day.

He liked to tell of the two great romantic loves of his life. He met and married his first wife, Priscella, in Massachusetts. They were married for 41 wonderful years. After her death, he met and married Joyce Greene in Fallbrook. They had 10 exciting years together, traveling extensively in the USA.

Howard enjoyed many special activities throughout his life, including performing in his youth as an Apache dancer and as a stand-in for Mickey Rooney in some of his action scenes. He served as the captain of the USC gymnastics team and was an accomplished artist specializing in painting Southwest art on petrified wood, and he was a published author.

Many people of Fallbrook lovingly know Howard because of his kindness and soft manner in their contact with him through his activities in the local Gem and Mineral Society as well as his active participation in the Church of Religious Science.

A memorial service will be held at Silvergate on Sunday, March 16, at 10 a.m. A DVD interview of Howard will allow us to once again see and hear him.

Friends and fellow church members are also invited to join in remembering Howard following services at 11 a.m. that Sunday at the Church of Religious Science, 400 East College Avenue.

All of us who knew and loved Howard would say that our lives were so blessed because he spent time in this world with us.