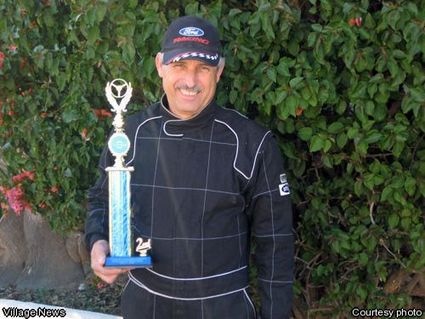 Ramsey, who finished fourth in the heat race March 1, took over second place in the second lap of that night’s feature and held the position for the remainder of the 20-lap main event.

“We went out there and just drove the wheels off the car tonight. It handled well once we got it set up,” Ramsey said.

Ramsey drove in the Cruiser division, a two-driver class in which one driver controlled the steering wheel and brake pedal and the other driver operated the gas pedal, from 2003 to 2007. This year the Perris Auto Speedway replaced the Cruisers with the single-driver Factory Stock division.

“It was less work,” Ramsey said of driving a Factory Stock. “You had better control of the car.”

Ramsey struggled during the six-lap heat race. “I couldn’t keep the car straight down the straightaways in the heat race,” he said.

“The front end wasn’t set up,” Ramsey said. “We were all over the place.”

Ramsey began the main event on the outside of the second row. He was third after one lap, and between turns one and two during the second lap he was involved in the division’s first-ever contact when he hit Ron Davis.

“I came down in front of him and spun out,” Davis said. “The other car went up.”

No yellow flag was needed, and Davis eventually finished fourth. “I got spun hard,” Davis said. “I had to play catch-up the entire race.”

Davis, who raced in the Pure Stock division at Irwindale Speedway in 2007 and finished second in the point standings, apologized to Ramsey after the race. Davis noted that the car was hit but not damaged. “I had a good time. That’s what we came here for,” he said.

Ramsey accepted the apology, and although he took over second place at Davis’ expense the LTD suffered some damage. “We were only running on seven cylinders after I had that little mishap,” Ramsey said.

The plug wire on one of the cylinders had fallen off. “It was missing really bad,” Ramsey said. “When it started missing I knew what it was, but I couldn’t do anything.”

The top three finishers were inspected following the race, which gave Ramsey a better view of his engine. “They actually made me pull a valve cover,” he said.

The missing cylinder allowed Darryl Kinnane to follow closely behind Ramsey. “I could hear him a couple of times,” Ramsey said.

Ramsey wasn’t aware how closely Kinnane was trailing. “I don’t have a mirror, so I don’t know what’s going on behind me,” Ramsey said.

Kinnane, who lives in Riverside, last raced at the Central California track in Pearsonville in 1988. “We came out here to run because they let us run big blocks,” Kinnane said of his Perris debut. “Hopefully we get more experience where I can pass some of these guys.”

Although Kinnane was not able to approach Ramsey, Phil Holmes had a comfortable lead for the entire race. “I could never determine where they were behind me,” Holmes said.

Holmes and partner Donny Fengler finished second in the 2007 Cruiser standings, one position ahead of Ramsey and his partners (Cruiser points were given to cars rather than drivers to allow for alternate drivers during the season). “I had a blast,” Holmes said of his Factory Stock debut. “I had never driven by myself before.”

Fengler will be driving a Street Stock in 2008.

The Cruiser division often saw the track watered down prior to the main event. That is not supposed to be the case for the Factory Stock class, but on March 1 the half-mile dirt oval was the recipient of drizzle during the night. Track officials reduced breaks in an effort to complete the racing schedule before the arrival of any rainfall heavy enough to make the track and pits too muddy, but the Factory Stock drivers experienced a wet track. “Actually the track was wonderful,” Ramsey said. “The car handled well on the wet track.”

Mud on the front screens was more of a problem. “After lap five it was like a heavy rain. You couldn’t see anything,” Ramsey said. “You could see the wall, but you couldn’t tell where the side berm was.”

The Factory Stock main events were 12 laps, although some 15-lap races took place. “I wasn’t watching the scoreboard,” Ramsey said about his first 20-lap race. “I’m just watching the track and running. But it feels good to run 20 laps.”

“It was fun,” Ramsey said of his first Factory Stock race. “Lots of fun.”