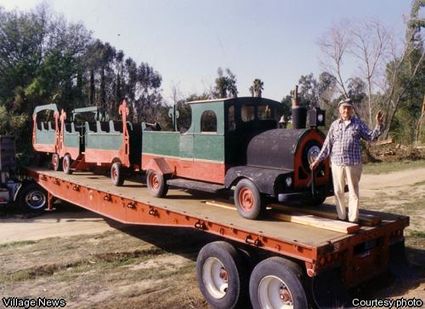 In Fallbrook, Frank Burris was well known for donning engineer garb, climbing aboard his self-built steam engine and participating in downtown parade festivities.

“He built his steam engine and put rubber tires on it so he could take it to the parade,” recalled Jacque Burris, his eldest daughter. “It had a matching passenger car in the back, so people could ride in the parade with the steam engine.”

Burris was also an “honorary lifetime member” of the Antique Gas and Steam Engine Museum.

On January 20, Burris passed away at the remarkable age of 104.

She said that on her father’s side of the family, there is great longevity of life: “My father’s parents lived until their mid-90s.”

Remembering the upcoming date of Burris’ birth, the family has decided to hold a rather extraordinary auction at the family residence.

On March 15, a vast amount of antiques, family heirlooms and household possessions will be auctioned off to the highest bidders.

“My father never threw anything away,” said Jacque. “Valuable and rare steam engine whistles will be auctioned.”

Jacque also pointed out that her father was a unique and unforgettable man who spent his youth in South Dakota. “My father was an electrical engineer and graduated from the South Dakota School of Mines and Technology.”

Burris was a natural whiz in his field, said Jacque, and much of his career was spent working on government projects. “He was a civilian in the Air Force; he worked as a liaison with the Air Force for many years.”

As far as Jacque’s mother and father were concerned, when they met it was love at first sight, she said.

“My father was nine years older than my mother and he met her when she was 16-years-old,” she said.

They dated for roughly 10 years, much of that maintained as a long-distance relationship, as Burris was working in different parts of the country.

After Burris landed a wonderful job in California, he sent for his future bride and they were married.

“My parents got married in 1936,” said Jacque. “In those days, you didn’t get married until you were financially stable.”

Jacque could best describe her father as always having definite opinions on subjects and immersing himself in the perpetual pursuit of knowledge.

“When my father was in his 90s, he bought his first computer and went to a computer club here in Fallbrook,” said Jacque. “His goal was always to be learning.”

Like many adult children who have lost a parent, Jacque recalls her fondest memory of her father from her childhood.

“My father would take me and my sister Barbara down to the railway station and we would count the boxcars,” said Jacque. “We would sit there for a couple of hours and watch the trains go by.”

There is no doubt that Burris enjoyed sharing his passion of trains with his daughters, his community and visitors of the Vista Antique Gas and Steam Engine Museum.

A special note about the auction: The items at this auction are both antique and unique in nature. For detailed information about what will be offered, time and location, contact Tony Mitchell De Zago at (760) 685-2558.