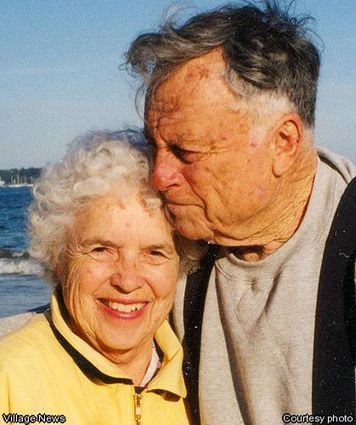 Vivian was born in Boston, MA, on November 28, 1923, to Marion and Walter Phillips, who were raised in Oswego and Fair Haven, NY, respectively. The family moved to Newtonville, MA, in 1927.

Vivian graduated from Newton High School in 1941. She attended Mount Holyoke College in South Hadley, MA, where she graduated with a BA in 1945.

Vivian and her brother, Doc Phillips, then went to College Cevenol in Lyon, France, to help with the rebuilding after WWII.

She was also very active in the Appalachian Mountain Club for 50 years and was publicly hailed as a pioneer for women in whitewater canoeing in New England, a sport she would enjoy well into her late 70s in addition to skiing and sailing.

In 1952, Vivian traveled with a friend to Grenada, Spain, where she unexpectedly met her future husband of 52 years, William Ward Vickers, in a train station.

After William completed his five-year voyage sailing around the world, he contacted Vivian in the US and married her three years later.

Together, they raised three children in Prides Crossing, MA, and then retired to Bonsall, CA, in the winters and Fair Haven in the summers.

Vivian will be buried in Fair Haven.

William Ward Vickers died peacefully at his home in Bonsall on January 5, 2008, at the age of 84.

William was born in San Francisco on June 21, 1923, and raised in Long Beach by his mother, Anna May Hanahan Thomas.

He attended St. Catherine’s Military Academy in Anaheim and later graduated from Long Beach Polytechnic. He was attending Cal Tech when he enlisted in the Marine Corps during WWII. As an aviator, he flew Corsairs off aircraft carriers.

From 1947 to 1952, William sailed around the world with five others. They left on a barquentine called the “California” with $500 and returned five years later. Their story has been recorded in William’s book “On Wits and Wind.”

After returning, William attended McGill for his PhD in geophysics. He was also a Fulbright Scholar in Norway and lived in Antarctica for six months as a participant in the 1957 Geophysical Year.

After years of exploration, William became a scientific researcher at MITRE Corporation in Bedford, MA, where he contributed to the field of atmospheric physics.

He retired on a ranch in Bonsall and spent his summers in Fair Haven, NY, with his wife, three children and five grandchildren.

William will be buried in Fair Haven.