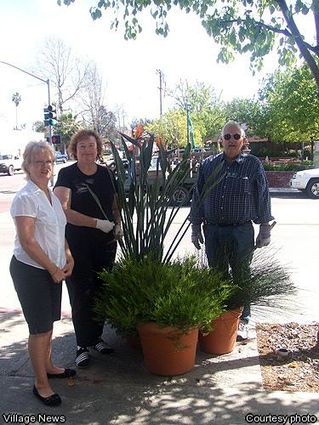 Judi Sanacore (left), chairman of the Downtown Flower Pot Project, tends to some of the plants on Main Avenue with volunteers Carol and Paul Croy.

FALLBROOK — The Fallbrook Garden Club, one of the largest garden clubs in the country, has proven they care about more than just their own backyards.

When asked to help the Fallbrook Beautification Alliance (FBA) with their ongoing Downtown Flower Pot Project, their response was an overwhelming yes.

The FBA has approved finishing the final two blocks of the downtown flower pots, a project in the works for the past four years.

With the new 42 pots added to the 74 already on Main Avenue, downtown Fallbrook will have a grand total of one hundred sixteen.

The increase in the number of pot...