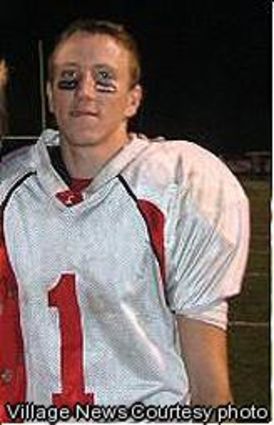 “I’m pretty excited that I get to play at the next level,” Hayes said. “That’s a big thing for me.”

Western New Mexico University is located in the town of Silver City.

“I liked the campus. It wasn’t too spread out,” Hayes said of choosing Western New Mexico.

Another factor in Hayes’ decision is that Fallbrook High School teammate T.J. Sumpter had previously signed a letter of intent to play football at Western New Mexico.

Hayes also cited the Mustangs’ coaching staff. “They were very nice coaches, and they knew what they were talking about,” Hayes said.

Western New Mexico is in Division II of the National Collegiate Athletic Association. The Mustangs play in the Rocky Mountain Athletic Conference.

The 2007 football team finished fifth among the nine teams in the conference with a 4-4 record against RMAC opposition and posted an overall record of 4-6.

“He’s got good speed,” Western New Mexico receivers coach and recruiting coordinator Marcus Reischl said of Hayes. “He’s really good at making moves after catching the ball, and I think he’ll have a great, great future here with us.”

One drawback of Western New Mexico is that the school doesn’t have a track and field team, although that did not deter Hayes.

“I didn’t expect to go to college for track,” he said.

Had Hayes signed with a school which has a track and field team and whose football coach would allow athletes to participate in that second sport, Hayes would have considered participating in track and field as well as college football.

“I would have at least tried to go out for it,” he said.

He notes the influence of Fallbrook Pop Warner’s Mark Welsh.

“He was a big part of my football career,” Hayes said of Welsh. “He’s the one who pretty much raised me as a football player.”

Although Hayes is currently a wide receiver, he has also been a running back.

Hayes spent the 2004 season on Fallbrook High School’s freshman team and started 2005 on the junior varsity team before being called up to the varsity during his sophomore season.

He was a second-team all-league selection in 2006 and earned honorable mention Avocado League recognition as a senior. He was also named Fallbrook’s offensive player of the year for 2007.

Hayes spent his freshman and sophomore seasons playing basketball for Fallbrook High School, although he did not reach the varsity.

He first ran track as a junior. “They saw me at football practice one day,” he said.

One of his football teammates recommended that Hayes and Sumpter’s brother Marquis try the track team.

“We just liked it, so we stayed,” said Hayes, who did not participate in any spring sports as a freshman or sophomore.

“If he can play, he’ll play,” Reischl said of the possibility of Hayes playing as a true freshman.

He will likely pursue an athletic training major at Western New Mexico.