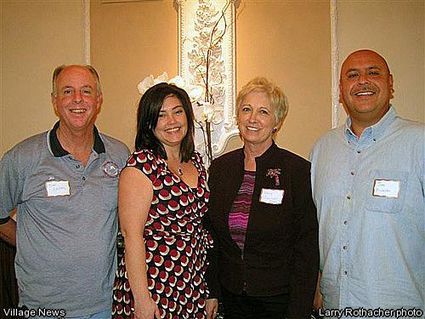 Employees of the Month (from left) Jim Kallas, Gina McInerny, Nancy Cullison and Jamie Miramontes are presented at a recent Rotary meeting.

Awards went to both certified and classified employees for the months of December and January.

Custodian Jim Kallas, who joined the district in 1992, was nominated for his pride in campus cleanliness and graffiti removal and school secretary II (Principal’s Office) Gina McInerny, with the district since last June, was nominated for managing the office during the fires: replacing the 40 teachers who were out, organizing and setting up the evacuation center and doing dial-outs and staff and student notification, all while her husband was on the fire line.

The Employees of the Month program is part of an ongoing effort by the Rotary Club to support local schools and employees.