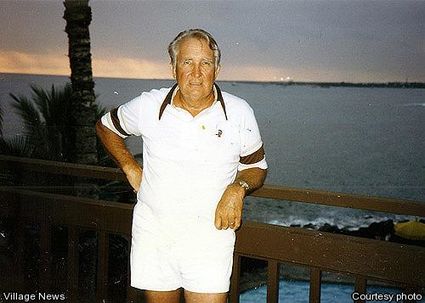 After the war, Grant joined Crown Coach Corporation and built school buses and fire engines for 40 years. He began as sheet metal fabricator and retired as vice president of manufacturing in 1986.

Grant used his natural mechanical skills to build and fix a wide variety of solutions for family camping and home projects.

Grant proposed to Doris on Valentine’s Day in 1949 by saying, “You have pretty hands, but they need a ring.” Their active life together focused on their children, their many friends and their church.

The couple has been involved in the Methodist Church since 1955 in Lynwood, La Habra and Fallbrook, CA.

Grant was an athlete who played softball, bowled, water-skied and swam. Family activities included coaching many of his son’s baseball teams, camping, golf and gardening.

Grant started his family camping shortly after Merrill was born; that created many wonderful memories of water-skiing, dirt bike riding, campfires and friends.

As a proud father, he was always at Merrill’s games and Merlene’s cheerleading and dance activities.

Grant’s favorite saying in recent years was “We have a good life!” All who knew Grant agree and that quality of life resulted from his unselfish commitment to his family and friends. Our sadness is tempered by the wonderful memories he left with us.