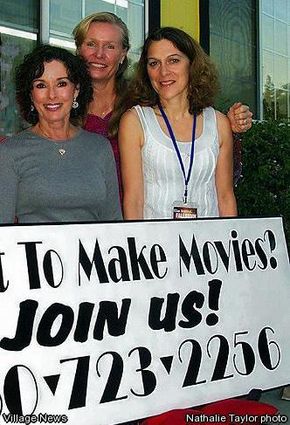 The cameras have stopped rolling and it is now time to sit up and take notice of 80 films from around the world that were selected for the inaugural Fallbrook Film Festival.

Chosen from 200 submissions, the juried works are quality pieces.

Mandrayer continued, “There are more getting involved in making films because of the technology available. It used to be very cost prohibitive.”

It has taken an incredible amount of energy, planning and execution to produce the three-day event, which will take place April 25-27 in downtown Fallbrook.

There will also be films screened such as “Dean LeCrone vs. The Mutants of Comic-Con,” which seem to fall into a category all their own.

One thing is guaranteed: the inaugural festival will be excitement with a capital “E.”

Ten judges with different tastes to cover a wide spectrum selected the films. The panel of judges was not only local residents well-versed in the arts but also members of the Writer’s Guild of America, the Director’s Guild of America and the Screen Actors Guild.

“We wanted to have a judging system that would be reflective of our audience,” Mandrayer noted. “Some did submit more than one film, but the judges chose only one per person. Fallbrook High School students also have several submissions that were chosen.”

Various workshops will take place during the festival, including one by Patricia West Del Ruth, who will conduct an acting seminar on Saturday, April 26, at 9:30 a.m. Mark Rosenbush, an independent filmmaker, will teach participants how to market films online at his workshop the same day at 11 a.m.

A full schedule of workshops is listed at http://www.fallbrookfilmfactory.com.

Independent filmmaker James Kerwin, who for two consecutive years was listed as one of Los Angeles’s top directors by Back Stage Magazine critic Paul Birchall, produced a film entitled “Yesterday was a Lie,” which will be screened at Café des Artistes on Friday, April 25, at 8 p.m.

The film won the gold medal in the Director’s Choice category at the Park City Film Festival earlier this year. It also took a Bronze Telly award in the Film Entertainment Category.

“The film is a science fiction noir film shot in classic black and white,” Kerwin noted. “It is a detective story with a fantasy twist.”

All of the science used in the 90-minute film is real due to the fact that Kerwin studied astrophysics at the university level.

Chase Masterson, an actress who has appeared in many films and television shows, including as a regular on the popular “Star Trek: Deep Space Nine,” acts in the film but is also sitting in the producer’s chair for the first time.

“It is an extremely challenging process,” she said.

“The nature of film noir and James’ vision is that every shot is like a photograph. In production value the film looks much more expensive than it truly was,” Masterson continued. “but even if we had an infinite amount of money I don’t know if it would have looked much different.”

Kerwin and Masterson are both “pleased to be part of the Fallbrook Film Festival.”

“We know that there is a large contingency of art fans here and the creative community is very much alive,” they agreed.

Fallbrook resident Noel Horwin, longtime host and executive producer of the television show “Life in California,” plans to film a segment about the festival.

Horwin said his show is “a people show where we find out the who, what, where and why of people.” He will highlight the visiting filmmakers as well as the events of the festival.

“I think the Film Factory and festival are fantastic new elements for Fallbrook.” Horwin said. “One thing that really impresses me <about the Fallbrook Film Factory> is that they are really interested in the craft.”

Science fiction is Dean LeCrone’s forte, and one of his films will be screened at the festival.

LeCrone has worked as a performer at SeaWorld and is also a cartoonist.

His 45-minute film, “Dean LeCrone vs. The Mutants of Comic-Con,” was edited down from eight hours of footage shot during interviews of the costumed participants at the San Diego International Comic-Con festival.

The film will be screened at J.J. “Purdy” Landers on Friday evening at 10 p.m.

LeCrone urges people to view his film and “to see what madness and hilarity takes place behind the doors of the biggest comic book convention on the planet!”

The executive director of the Fallbrook Film Festival, Brigitte Schlemmer, said, “I am working with a great team and I think the festival will bring visitors to our village. I hope to see people filling our hotels, visiting our galleries and shopping in our shops. It is a pedestrian-friendly environment with free parking.

“We are collapsing a lot into a short window of time, but the way that the director of programs set it up to flow there will be something always going on.”

A Lifetime Achievement Award will be given to two-time Emmy award-wining cinematographer (“The West Wing”) and former Fallbrook resident Tom Del Ruth. He also worked on films such as “The Outlaw Josey Wales,” “Stand By Me,” “The Breakfast Club” and “Look Who’s Talking,” as well as several television shows, including “ER” and “The X Files.”

Del Ruth is a member of the American Society of Cinematographers (ASC) and has won three ASC Awards.

Adam McKay, the filmmaking partner of Will Ferrell, will be honored with a Spotlight Award to recognize his contributions to film, television and the Internet.

McKay has directed films such as “Talladega Nights” and “Anchorman: The Legend of Ron Burgundy,” as well as the television show “Saturday Night Live.”

Individual tickets to the Fallbrook Film Festival can be purchased for each screening or workshop as well as for the opening night reception at Fallbrook Art Center.