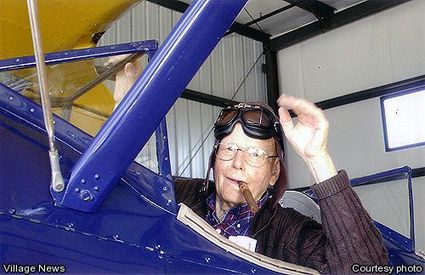 Clyde Mees sits in the cockpit of the biplane that was part of his birthday treat.

FALLBROOK — Retired US Navy Commander Clyde Mees of Fallbrook took to the air in celebration of his 90th birthday, which was March 10.

Mees’ son and daughter, Tom Mees of San Luis Obispo and Carole Mees of Fallbrook, took him to Fallbrook Airpark, where a World War II vintage biplane was waiting. Mees had trained in that type of aircraft during the war.

When the plane’s owner asked Mees if he would like a ride in the aircraft, Mees replied, “I want to fly it!” – and fly it he did.

After his celebratory flight, Mees was honored at a dinner party, hosted by his children, at Pal...