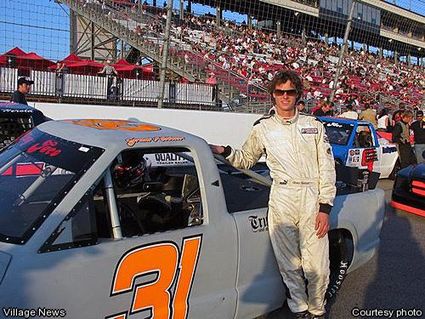 Grant Hebner in his #31 Super Truck.

March 22, 2008 was a day of firsts for Fallbrook’s Grant Hebner. Nineteen-year-old Grant was preparing to take the green flag in his first NASCAR Super Truck race in front of over 7,500 fans on opening night at the Toyota Speedway in Irwindale. This would also be his first race on an oval track.

“I really didn’t know what to expect this first time out,” said Grant. “We had only tested the truck twice before and our lap times were good, but racing in traffic on a half mile oval was an unknown to me. I felt like if we could finish the race in one piece, stay out of trouble, and learn something along the way; it would be a successful debut.”

“Jason and I both come from a karting and road racing background,” said Grant. “He has already successfully transitioned to the world of oval racing, so he understands exactly what I’m going through.” Jason acts as Grant’s race engineer and spotter while his father, Kevin, sees to the crew chief duties.

Saturday night’s race was preceded by Friday night practice sessions. “We felt like we had a good race setup going into Saturday. However, qualifying was going to be a challenge,” said Grant. “You have to get right up to speed and put in a perfect lap early, before the tires lose their performance. The competition is just so close. You can’t leave anything on the table or you start last.”

Grant’s father, Bryant, watched the qualifying session from the spotters’ stand. “We knew Grant’s fastest time would come on his second or third lap,” said Bryant. “We looked up at the scoring tower and Grant’s number was at the top! We couldn’t believe it.”

Hebner stayed at the top until the last few minutes when he was bumped down to third place on the 23 car grid. He was only .032 of a second off of the first place qualifier’s time. “Qualifying near the front was a huge advantage for me,” said Grant. “We knew I had a lot to learn about working my way through traffic.” 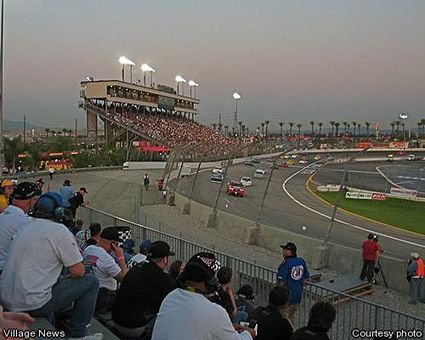 Hebner got a good start in the main race running right up front with the leaders. About half way through the race, the leaders, including Grant, began to lap slower traffic on the ½ mile oval. Once in traffic, Grant’s inexperience showed as he “learned the ropes” aided by Jason Bowles coaching him on the in-car radio. “I made a few mistakes trying to pass slower traffic and that allowed two trucks to get by me,” commented Grant.

Now running in fifth, Hebner stayed with the lead pack, pressuring the 4th place truck until the checkered flag flew. He finished 5th just 2.5 seconds behind the winning truck.

“We showed up to run this series with a healthy respect for the challenge it would present,” said Hebner. “To finish in the top five with no damage in our first race is more than satisfying. Hopefully we can build on this and compete for race wins in the future.”

The NASCAR “King Taco” Super Truck series consists of 14 races that run through October at the Toyota Speedway in Irwindale, California. Schedules can be found at http://www.GrantHebnerRacing.com.