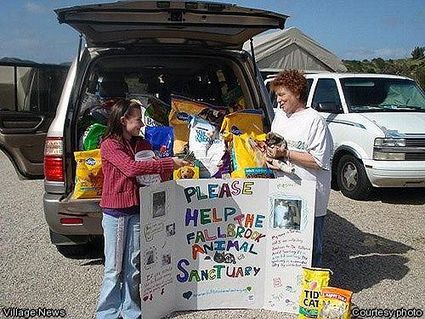 Jordan Trouw delivers donations she collected to Janet Lucore, founder of the Fallbrook Animal Sanctuary, who is holding

FALLBROOK- Jordan Trouw, a fifth grade student at Bonsall Elementary School, stunned volunteers at the Fallbrook Animal Sanctuary when she dropped by recently with a donation.

Jordan had taken it upon herself to arrange with the local Albertson store to collect food, litter and donations for the animals at the sanctuary. She worked with the store manager, Kim Newman, to make announcements over the loudspeaker to tell customers what she was doing. The response was overwhelming.

Jordan collected over $450 in cash and almost a thousand pounds of dog food, cat food, and litter, which she was...