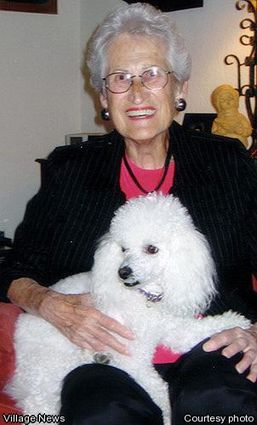 Ruth was born and raised in Chicago, IL. She graduated with a nursing degree from Presbyterian St. Luke’s Hospital in Chicago and was asked to join the faculty. Later, she was an Associate Professor of Pediatric Nursing at the University of Wisconsin and at Sacramento State University. Her last position was as an outreach pediatric nurse specialist at Long Beach Memorial Hospital.

Ruth was an active member of Christ the King Lutheran Church, where she was a Stephen’s Minister and member of the choir. Ruth was a member of the AAUW and served on the board of the Fallbrook Healthcare Foundation. She was the founder of the annual Ruth E. Redmann Paws in the Park event.

Ruth had a zest for life and made every occasion a special event. She loved her friends, enjoyed mahjong, traveled frequently and freely gave of herself to others. She had a big heart.

Bev Azure, Ruth’s best friend and roommate of 52 years, preceded her in death. Ruth is survived by a nephew in Texas, several cousins and her beloved poodle, Lily.

There will be a memorial service Saturday, April 26, at 10 a.m. at Christ the King Lutheran Church, 1620 South Stage Coach Lane, Fallbrook.

In lieu of flowers, Ruth had suggested a contribution be given to the Fallbrook Healthcare Foundation, PO Box 2155, Fallbrook, CA 92088.