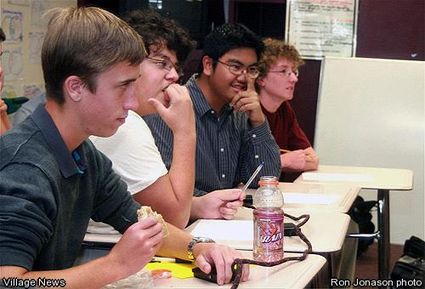 For the first time educators can recall, all three Fallbrook High School academic teams – varsity, junior varsity and freshman – took first place in the North County Academic League and will compete in the finals this week.

The varsity and junior varsity teams swept league play, undefeated, in the season that ended in March. The freshman team lost only one match, to Rancho Buena Vista, earning them first place honors as well.

While these students’ incredible intelligence is something to behold, teachers and coaches say the personalities involved are refreshing.

“These students are so down-to-earth, fun-loving and humble,” said Connie Fellios, coach of the junior varsity squad.

Tryouts for the teams were held in December and were open to any and all interested students. Students understand that once they are selected for a team, practice and competition is on their “own time.” There is no designated class time available at Fallbrook High School for the teams.

“The teams usually practice three days per week, during lunchtime,” said Fellios. “They bring their food with them, eat and practice.”

In observing one of the practice sessions, one would think they were sitting in on a rollicking television game show taping. With coaches firing difficult questions at them, team members compete to provide the right answer first by pressing a buzzer.

Filled with high quantities of energy, some answers evolve into friendly arguments and debates. Questions run the gamut of subjects, including: literature, politics, musical compositions, spelling brain twisters and much more.

“It’s like ‘Jeopardy,’” Fellios said, smiling. “They are so stimulating and so much fun. [These students] enjoy learning and I learn things in the process as well. It’s invigorating to me as a teacher.”

Fellios said it is common for friends of the team members to sit in and watch, just for entertainment purposes. “[Other students] love to come in and watch,” she said.

The academic teams’ competitions are held usually on Thursday evenings during the season, with some weekend tournaments. It is not uncommon, Fellios said, for many of the students to juggle their academic team involvement with other commitments in sports, community service and other activities.

“We have students who are in jazz band, Madrigals, Future Farmers of America, track, tennis and many other endeavors,” Fellios said. “Most of the students stay involved in the team for all four years they are in high school.” 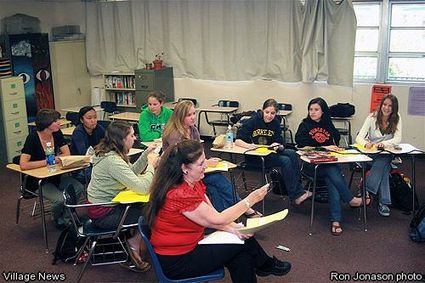 Members of the junior varsity and varsity academic teams meet at lunchtime at Fallbrook High School to practice with varsity coach Betz Critchley. Critchley poses questions to the group to see who can give the correct answer in the quickest time.