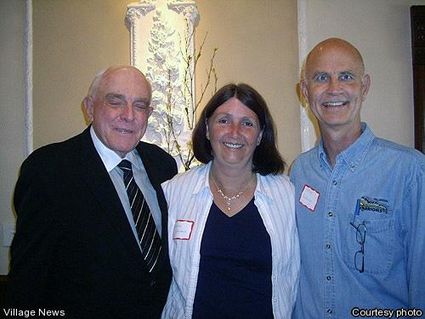 FALLBROOK — Shar Larsen and Stephen Kettering were introduced as Employees of the Month by Fallbrook Union High School District (FUHSD) Interim Superintendent Dr. French to the Rotary Club of Fallbrook at a recent meeting.

Larsen, with the district since August 1998, is an Athletics Department clerk typist III. “Shar is an invaluable asset in an office that has undergone many changes in the last year,” said Dr. French.

Kettering, with the district since 1976, became a social studies teacher in 1983. Of Kettering, Dr. French said, “Stephen does an excellent job of engaging his students. He is a kind, caring professional who always seems to display a positive attitude. He is a candidate for the San Diego County Teacher of the Year.”

Rotary President David Kauffman presented both with certificates of achievement from the club. The monthly awards are part of the ongoing effort by the Fallbrook Rotary Club to recognize and honor outstanding and professional performance in FUHSD employees.