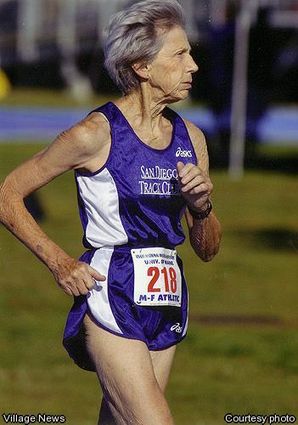 When visiting with 87-year-old Gerry Davidson at her Fallbrook home, it wasn’t a surprise that she was sporting her running shoes. Still jogging three miles each day, this energetic woman has raced in 25 marathons and competed nationally, along with her late husband, Bob, in the USA Masters Track and Field Championships.

“I never did any running before I moved to Fallbrook,” said Davidson. When she and her husband moved to Fallbrook in the 1970s, she decided to go jogging in the mornings for exercise. “Jogging really became a popular activity in the 70s,” she said.

What began as early morning exercise morphed into preparing for a race one year later. “I ran the Leggs 10K race in San Diego,” said Davidson. She felt good about completing her first official run and entered the Leggs Race year after year until it was discontinued.

“I’ve had an interesting running history,” she said. Davidson has competed in the Heart of San Diego Marathons, Boston Marathon, Los Angeles Marathons, Long Beach Marathons and the Avon Marathons. In fact, Davidson even had her photo in the Runner’s World Magazine years ago.

“For me, running gives you a purpose, and it’s such a healthy thing to do,” she said.

Davidson looks amazing for her age, and she contributes this to her lifestyle. “I eat a healthy diet with fruits, vegetables, grains, and protein,” she explained. “And I believe that running has a lot to do with my health, too.”

To facilitate her healthy diet, Davidson has planted a vegetable garden again this year. This time, it’s a garden that she and her neighbor are tending together. “We planted beets, carrots, lettuce, radishes, and squash,” she said.

Though humble, Davidson has earned awards for her athletic abilities, including medals (shiny gold ones) in the USA Master Track and Field Championships. “ did very well and won lots of races in our age division.” She and her husband traveled to many locales for meets, including Sacramento, Hawaii, North Carolina, and Maine.

Davidson considers herself to be quite lucky to have met such wonderful people in the running and track and field world. And this great feeling spills over into her life in Fallbrook. “I have a nice life here in Fallbrook, associating with such positive people.” What attracted Davidson to Fallbrook was that small town feel, and she still enjoys it, she says.

Another group of outstanding people that Davidson associates with are her fellow volunteers with Save Our Forest (Fallbrook Land Conservancy). “This organization is doing something really good for Fallbrook, and I have met a lot of good people working here who know how to get things done.”

About ten years ago, Davidson and her husband began helping out with Save Our Forest. “I enjoy it because it’s something positive to do.” Every week, Davidson heads down to Main Street, and waters and cares for her assigned trees.

“It’s such a good feeling to put in trees all over town. It’s quite amazing, because it changes the town,” she enthused.

Davidson has enviable boundless energy and spirit. And with her running shoes on, she undeniably knows the secret to living healthy.