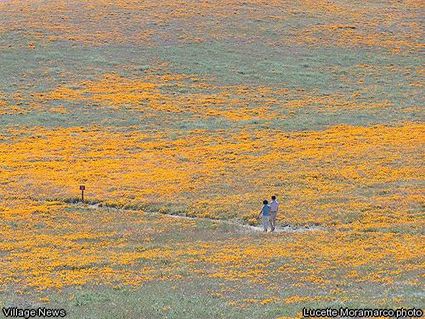 A couple heads out on a trail to explore the Antelope Valley Poppy Reserve in mid-April when the flowers were in their peak blooming period.

I had wanted to go to the Antelope Valley California Poppy Reserve to see one of my favorite flowers en masse for several years. So, when the Fallbrook Senior Center offered a trip out there, I had to go on it.

Miyo Haver and Dee Munoz planned a full day’s worth of activities for the center’s trip last month. A total of 51 people boarded the Silver State bus for the three- hour ride to the Lancaster area on the morning of April 17, 2008. To help pass the time, a movie was shown on the bus’s three television screens and a snack of cereal bars and bottled water was passed out.

The first stop on the trip was at the Exotic Feline Breeding Compound’s Feline Conservation Center in Rosamond, north of Lancaster. The group was given a guided tour of the center and its endangered feline population. The guide told us that “the animals here are not returned to the wild, just their genetics.”

Many of the big cats were sleeping during our visit and most of the ones who were awake were pacing back and forth in their cages. The lynx growled as we stopped in front of its cage as it “doesn’t like crowds,” the guide said.

We saw a male Persian leopard whose mother lives at the San Diego Zoo and a black mother jaguar that had one black offspring and one that was spotted. The guide explained that there is no such thing as a panther; what we call panthers are really black jaguars, their genus name being panthera onca.

Some of the felines are traded with felines in the facilities of other countries to create a more genetically diverse population in both places. Anyone interested in learning more about these wildcats, from fishing cats and ocelots to leopards and tigers, can find more information and see the center’s collection at http://www.wildcatzoo.org. The center can also be reached at (661) 256-3793.

After a long lunch at the Red Lobster in Palmdale, our next stop was the Poppy Reserve 15 miles west of Lancaster. The bus driver took the long scenic route so we could see the scattered patches of California poppies covering fields and hillsides everywhere we looked. Part of the California State Parks System, the reserve’s 1800 acres were also splashed with the fluorescent orange of our state flower.

We were welcomed by a park ranger who reminded us that the flowers are not for picking and that we should stay on the trails while watching out for rattlesnakes. Although the wildflower season runs generally from March to May with the peak blooming period in mid-April, the park is open year round from sunrise to sunset. The Jane S. Pinheiro Interpretive Center is open from 10 a.m. to 4 p.m. on weekdays and 9 a.m. to 5 p.m. on weekends during the wildflower season. The center offers a short video, wildlife and plant displays, and a gift shop.

The wildflowers at the reserve grow just like any wildflower, with only the water provided by nature. Since they grow in desert grassland, the amount of poppies and the length of their blooming season depend entirely on the weather each year. With the generous amount of rain this year, the poppies were abundant and spectacular in color.

Trails of various lengths and difficulty are laid out over the reserve for those who want to take the time to explore the fields of flowers which also include lupine, Owl’s clover, cream cups and other wildflowers. For more information, see http://www.parks.ca.gov. 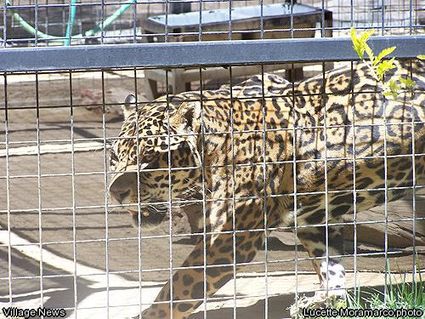 Cisco the jaguar lives at the Exotic Feline Breeding Compound in Rosamond, CA. Jaguars are native to South and Central America.

Our last stop of the day was at the Blum (pronounced “Bloom”) Ranch in Acton, southwest of Palmdale. The ranch was homesteaded in 1891 by George and Magdalena Blum who both came from Switzerland. George was a stonecutter who cut the stones used in building their house. The ranch today is run by their granddaughter and her husband who have 1,000 pear trees, 5,500 peach trees and four acres of lilacs. Besides those products, they also sell almonds, honey, dried fruit and fruit preserves. For more information, see http://members.aol.com/BlumRanch/ or call (661) 947-2796.

The ride home was not as long and we finished watching another movie as the bus made its way back into Fallbrook. We arrived back at the Senior Center about 8 p.m., almost 12 hours after we left, but it was a fun day for nature lovers, filled with felines, flowers and fruit trees.