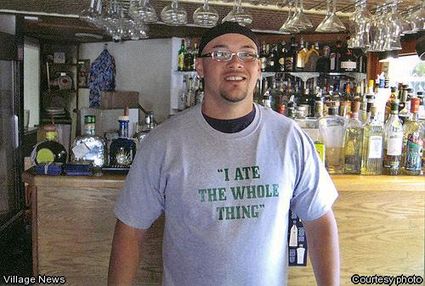 Chris Isonaga wears one of his prizes from winning the Big Del Burrito Challenge at La Caseta.

This is the seventh year the restaurant has held the challenge and the first time Isonaga has attempted to eat the four-pound burrito.

Twenty-five people attempted to down the burrito this year in the one-hour period allowed. Sixteen succeeded and will have their pictures on La Caseta’s winners’ bulletin board for the next year. The winners will also have their names on a permanent plaque in the restaurant.