'Yesterday Was a Lie' mysterious, savory 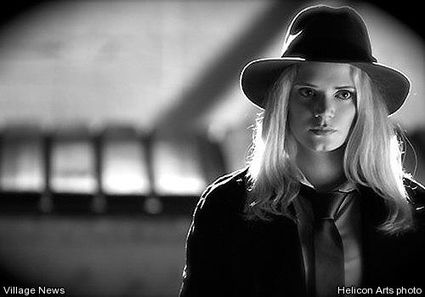 Take a cast with enviable experience, add it to the mysterious ambiance of film noir, then swirl it together with a visionary writer/director and you are bound to get one outstanding film. The Fallbrook Film Festival selection “Yesterday Was a Lie,” a 90-minute film shot in the tradition of film noir, was written, directed and edited by Fallbrook resident James Kerwin. The film has already won several awards and further information can be accessed at http://www.yesterdaywasalie.com.

The producer was Chase Masterson, who did double duty, also starring in the film as a sultry and mysterious lounge singer. Masterson was a regular on “Star Trek: Deep Space Nine.” Kipleigh Brown, who starred as the film’s protagonist, Detective Hoyle, also has experience with the science fiction genre and once appeared on “Star Trek: Enterprise.”

Director of photography is Jason Cochard, who masterfully captured the mystery. The film was shot in color, then the color was pulled out.

“Yesterday” is film noir swirled with science fiction. Filmmaker Kerwin studied astrophysics at the university level and thus all of the scientific information used to develop the story is factual. Much of the film is shot in a sort of twilight state, maybe to accentuate the dreamlike aura or maybe to have the viewer ponder the blurred line between realities. Kerwin has adeptly woven an intellectual tale with metaphysical overtones and an artistic heart.

An entire essay could be written on film noir – what fits and what doesn’t – but it is basically a style shot in black and white that was prevalent in the 1940s and ’50s. Fedora hats are prominent and people like Humphrey Bogart and Lauren Bacall, or people who look like Humphrey Bogart and Lauren Bacall, star in the films. The films are brimming with rough characters, sultry women and dead bodies. Rain-slicked shadowy city streets and an abundance of fog also prevail.

To me it is a refreshing departure from the extremely colorful films of today. These films definitely have their place, but I feel that colors can sometimes be distracting. The dark and light does not dominate your senses and thus takes you closer intellectually to the subject matter.

The film begins with Detective Hoyle (Kipleigh Brown) being quizzed by a therapist. She tells the listener of a dream and also of a fear that she is being haunted by someone. Throughout the movie she slips in and out of various time dimensions or realities. How many different realities? There is one with a microphone that looks decidedly 1940s. Then, a computer jogs us back to the present with a message, “You are signed in at multiple locations.” The film may be about the power of the “multiple locations” of human memory or even the liquidity of time.

At one point, Hoyle enters a bar with flickering lights where she meets a sultry singer with a rich, breathy voice (Chase Masterson) whose name is never given. The singer offers to assist Hoyle in her search for something elusive, which also includes a search for a notebook with formulas that may uncover secrets to time itself.

Hoyle and the singer appear at an event in the same dress. Questions abound. Are the singer and Hoyle one and the same? Is this all imagined or has Hoyle slipped through a time warp?

A thought-provoking scene occurs when Hoyle and the singer share a taxicab, then the singer exits the car and the driver turns around to ask Hoyle if she plans on getting out, as if no one had ever left the vehicle.

Throughout the film, light slices through the dark and fog in an artistic manner. Sound is also used artistically. During an alley scene with broken glass clicking and crunching Hoyle comes upon a dead body (Peter Mayhew, who also portrayed Chewbacca in the “Star Wars” films) with a TS Elliot book open to the words “Through the unknown and unremembered gate.”

Salvador Dalí’s surrealistic painting “The Persistence of Memory” figures heavily into the film. Dalí himself was rather murky about the actual significance of the painting. In the film, does the painting represent the time imbalance? Or, maybe it depicts a linking of Hoyle’s memories. 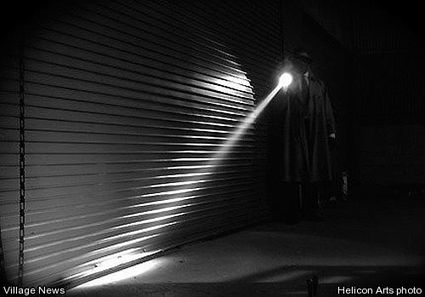 Filmmaker Kerwin is grateful to the Dalí estate representatives for not only granting him the use of the painting but allowing the colorful painting to be photographed in black and white.

“Yesterday Was a Lie” is akin to the impact of poetry on the human soul. There is a pervading theme or truth to be discovered, but each viewer brings with them an individual interpretation. It is a film to be savored… swirled around the palate like a fragrant glass of wine.

Like Dalí’s “Persistence of Memory” the true story may never be fully revealed, but instead be kept in a shroud of mystery like the fog that saturates the alleyways. A ground cloud that reveals portions of reality but always manages to keep some secrets.