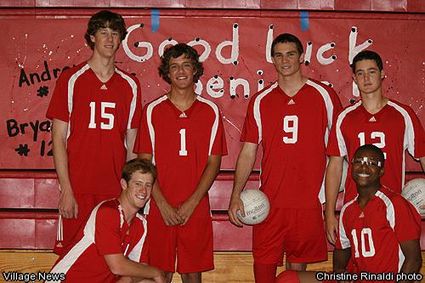 Fallbrook High School’s boys volleyball team finished second in the Avocado League standings and was given the unofficial eighth seed in the CIF Division I playoffs.

The Warriors had a 6-2 record in Avocado League competition, losing only to Carlsbad in both matches against the Lancers.

Fallbrook’s overall record was 14-6, and the four non-league losses were against Torrey Pines, Valhalla, Cathedral Catholic, and Ramona.

The losses to Cathedral and Valhalla were in pool play in the Scripps Ranch Tournament, in which Fallbrook won the consolation bracket.

The fifth through twelfth playoff seeds are unofficial and are subject to factors such as ensuring that league champions have at least one playoff home game and avoiding first-round playoff matches involving league opponents.

The top four seeds in each division are official.

“They’re just a little more experienced than we are,” Saunders said.

Fallbrook outside hitter Taylor Hughes was the Warriors’ only returning starter who was at that position in 2007.

“We’ve got the equalizer, Taylor Hughes, arguably the best player in the county,” Saunders said.

Two other 2008 Warrior spikers were on the varsity last year. Bryce Dornon was an opposite hitter in 2007, but 2007 junior varsity setter Jeff Kolb was converted to a libero during club play.

“Coming into the season we didn’t know who was going to set,” Saunders said.

The third returning varsity player is middle blocker Andrew Valencia, who was a backup in 2007.

The lack of experience didn’t prevent Fallbrook from entering the final regular-season game with a chance to share the league title, although Carlsbad quashed those hopes with a 25-17, 25-22, 25-15 victory May 8 at Fallbrook.

“We were feeling good about it,” Saunders said of the Warriors’ chances entering the game. “We had a good practice Wednesday night.”

“The second game was pretty competitive,” Saunders said of the May 8 competition. “The third game was disappointing.”

Carlsbad “held” Hughes to 23 kills. “We need other guys to step up,” Saunders said.

Not all of the six league wins went smoothly. “I wasn’t pleased at the beginning of either of our San Pasqual matches,” Saunders said.

The Warriors and Golden Eagles played two five-game matches. In each match San Pasqual took the first two games and led in the third game.

“We had to dig down and pull it out, so those were really big moments for us,” Saunders said.

The unofficial eighth seed gave Fallbrook a first-round home match May 13 against Bonita Vista, which ended the regular season with a 16-8 overall record, for the right to face top-seeded La Costa Canyon tonight in the Mavericks’ gym. 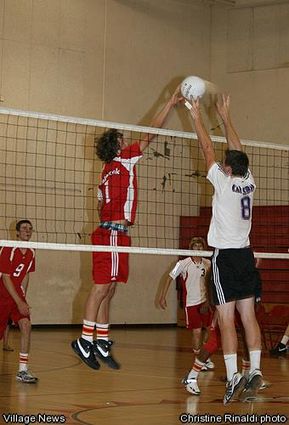 Bryce Dornon (#1) does battle at the net with Carlsbad opponents in the May 8 match. Carlsbad won in three games.

“I thought we’d get a little more respect in seeding this year,” Saunders said. “I was looking for a 4 or 5 spot.”

La Costa Canyon and Torrey Pines led the Palomar League standings, followed by top Division II seed Mount Carmel. The Division I fourth seed went to Rancho Bernardo, who finished 3-7 in Palomar League play and 16-8 overall, and the unofficial fifth seed was given to Poway, who compiled a 2-8 Palomar League record and a 14-17 overall mark.

The other Palomar League team, Westview, was seeded fourth in Division II with a 2-8 league record and a 13-15 overall won-loss total.

“I think we got hosed in the seeding, really,” Saunders said.