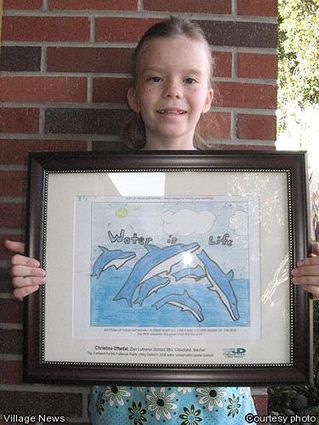 Christina Oftedal proudly displays her poster, which will be in next year

FALLBROOK — Fourth-graders from schools all over North County put pens and crayons to paper to color the best and brightest water-conservation posters.

But of the thousands of posters colored, only a few would make it into the final product: the 2009 “Water is Life” calendar.

The annual contest is open only to North County fourth-graders and is put into motion by the Fallbrook Public Utility District (FPUD) and 12 other North County water agencies collaborating to find the most eye-catching images illustrating the need for saving water. 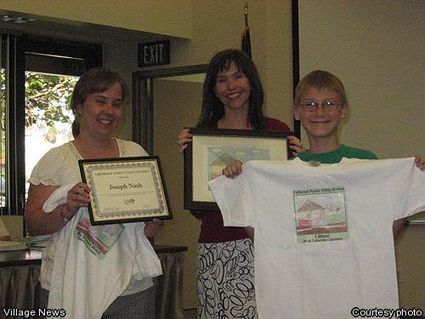 Joseph Nash (right); his teacher, Deanna Rahn (left); and Noelle Denke of FPUD show his poster, both the original and the t-shirt versions, and his winner

The top three Fallbrook artists were announced at the April board of directors meeting.

The top three didn’t know who they were because a judging panel secretly selected them from the 12 best Fallbrook drawings. All of the artists were recognized.

Those top three will have their artwork featured in the calendar and they won a t-shirt with their winning artwork printed on it. They are Christina Oftedal of Zion Lutheran School, Aislinn Day of La Paloma Elementary and Joseph Nash of St. Stephen Lutheran School.

All 12 pupils won special prizes and their entries are posted in FPUD’s community room throughout May. They will also go on display at the Art Campus of Fallbrook.