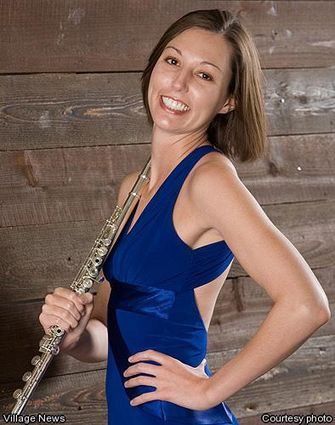 Jennifer Day will perform a solo on the flute in the May 25 concert of the Redlands Symphony Orchestra.

FALLBROOK — America is the birthplace of some of the world’s most celebrated music, and on Sunday, May 25, the Redlands Symphony Orchestra is pleased to perform works by some of America’s favorite composers.

Maestro Jon Robertson has chosen passionate and powerful works for the closing concert of Fallbrook Music Society’s 30th anniversary season, which will celebrate the genius of Ives, Copland, Bernstein and Gershwin.

“The conductor’s imaginative programming will provide us with two virtuoso soloists, with Jennifer Day on flute, and also conductor Robertson on piano,” says Brenda Montiel, president of Fallbrook Music Society. “We are delighted to have Maestro Robertson give tribute to our 30th anniversary season as he performs George Gershwin’s all-American favorite ‘Rhapsody in Blue’ with the orchestra.”

Ives combined the American popular and church music traditions of his youth with European art music. This selection begins with the familiar first line “My country, ’tis of thee” and remains one of America’s most well-loved patriotic hymns.

Aaron Copland, one of the most famous American composers of our time, is best known for his use of cowboy and folk songs such as portrayed in the rambunctious classic “Rodeo.”

Carmichael’s “Phoenix” features concert soloist and flutist Jennifer Day, who has been a soloist throughout California and has participated in master classes all over the world. She holds Bachelor and Masters degrees in flute performance and is an active freelance musician and teacher.

The grand finale and highlight of the day’s musical program will be when orchestra conductor Jon Robertson lowers his baton to enchant the audience as he plays George Gershwin’s famous classical composition “Rhapsody in Blue” at the piano.

This dynamic concert will take place at the Bob Burton Center for the Performing Arts, 2400 South Stage Coach Lane. A conductor’s preview at 2:30 p.m. is open to all ticket holders.

Tickets are available by calling (760) 451-8644 or visiting http://www.fallbrookmusicsociety.org.