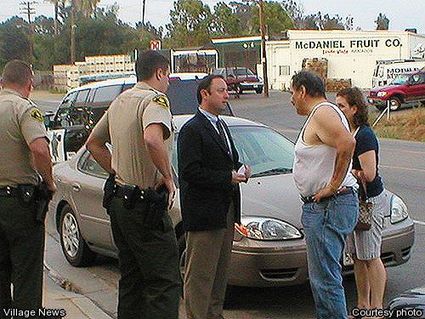 A man identifying himself as the victim

On Wednesday, May 14, at approximately 5:17 p.m., authorities received a 911 call reporting an assault with a deadly weapon at the Shell Gas Station located in the 900 block of East Mission Road. Although individuals were administering CPR to the victim, William Baker, 26, of Fallbrook, he survived only a few minutes before being pronounced dead at the scene. While early reports indicated that the incident may have been a failed attempted carjacking, officers now say Baker was stabbed during a struggle when the suspect stole his backpack, and the two may have been acquainted with each other, indicating this may not have been a random act of violence.

Within 15 minutes of the fatal stabbing, the suspect, Travis Sean Hopkins, 25, of Vista, was apprehended by Fallbrook Deputy Pete Alvarado and his canine, Quandro, on Highway 76 in Oceanside. Authorities say Hopkins, who they described as a white male, bald, with numerous tattoos, had an outstanding warrant for parole violation and was considered armed and dangerous.

Eye witnesses and video surveillance tapes indicate that the victim and the suspect both entered the convenience store on the gas station compound separately, but conversed while in there. It appears that they left the store at the same time and walked toward the area where the victim and his girlfriend (whose identity has not been released) were parked in a Jeep sport utility vehicle. A physical altercation ensued in which the backpack was stolen and the victim stabbed.

“There is no information to indicate that either of these men got gasoline at the station,” said Sgt. Dave Martinez, with the Sheriff’s Homicide Detail.

One of the witnesses partially memorized the license plate number of the primer gray Honda Civic that the suspect fled the scene in with a female companion later identified as 25-year-old Carmina Marie Bunnell. After deputies broadcast the information over the radio system, Deputy Alvarado, who was on his way in to report for duty, spotted the Civic traveling westbound on Highway 76 and pulled it over near North Santa Fe Avenue. When Hopkins attempted to flee the scene, Alvarado deployed his canine who assisted in successfully apprehending the suspect.

“<Alvarado and Quandro> did an excellent job,” said Martinez. Bennell, Hopkins’ companion, was detained by backup units, taken in for questioning, and later released.

According to Martinez, Travis Hopkins will be charged with one count of murder, one count of robbery and parole violation.

While a team of investigators were working the scene at the Shell gas station, another group was searching for the murder weapon in the area where Hopkins was apprehended. 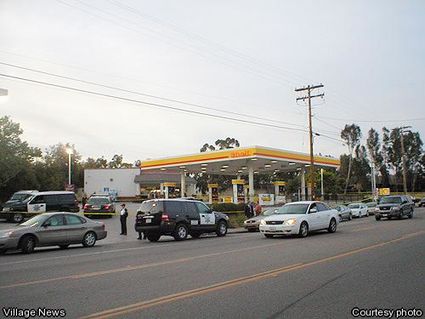 The gas station was closed and restricted with yellow police tape for the balance of the night. A crowd of between 20 and 30 onlookers milled around, on the west side of the gas station, after the incident.

Shortly after the incident occurred, as more law enforcement personnel arrived and television camera crews set up to report from the scene, Carol Ungerbiller, a 30-year resident of Fallbrook, said her sister was getting gas at the time of the stabbing. Both Ungerbiller and her friend Elease Parker said, “The area has been having more crime and that things have been changing for the worse.”

This incident marks the second homicide for Fallbrook in 2008. The first, which has already been classified as a domestic violence crime, and this one, with the information at hand as of press time, do not appear to be random acts of violence.