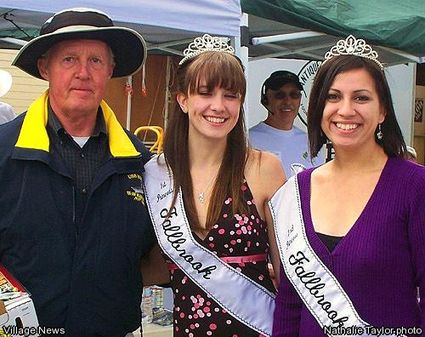 At the 43rd Annual Fallbrook Vintage Car Show there was a wide representation of vehicles beginning with a one-cylinder, four-horsepower 1904 Orient Buckboard that only weighs 500 pounds. The car was first sold for $425.

A truck bed served as a runway for a fashion show courtesy of Caravan, but the main attraction was the show with 280 vehicles parked on the Potter Junior High field. Tantalizing scents drifted from the food booths run by the Fallbrook Firefighters Association, Kiwanis and Boy Scouts.

A 1959 Chevy Truck was an eye-catching vehicle with its green exterior, interior and seats. Not surprising, this truck was named the “Incredible Hulk” after the comic book character. Owner Dennis Thies of El Segundo wanted to theme it Gumby, who is also green and vintage, but his wife won out and the truck was christened HULK.

Dennis has owned the truck for four years and has been restoring it for four years. The truck bed is painted HULK in large capital letters and is probably visible from a low-flying airplane. The tailgate is airbrushed with the same green giant. This is Dennis’ first time to show at Fallbrook and he heard about the show from his father, who lives in town.

A stunning 1957 Chevy Bel Air was shown by Nick Zizzo of Temecula. The car is Matador Red, the original hue. “The color looks different in the shade than in the sun,” Nick explained. He likes the car because “it is durable and strong.” It is equipped with a 283 engine with two four-barrel carburetors and a stick shift.

Nick has owned the car for two years and this is his first car show. His wife Lauren loves the car too. They take it out cruising at times, but not too far away from the garage. The Chevy has original radio. “You get one station if you’re lucky,” Nick said with a laugh.

Dave Kuhn of Vista was also a first-timer in the show with his 1923 Ford T-Bucket with a 1953 Buick 322 engine. “I’ve had the car for about three years and it was dead in the garage. I put a new motor in it and brought it back to life,” he said.

The car is equipped with headlights and radiator which Dave said was the 1915 kit. The gas lights need to be unscrewed so that the wick can be lit, and the holes on the side are for ventilation. Dave said that the car is very rough riding, but I am sure that its unique and fascinating qualities make up for it.

Another showpiece was a 1910 Locomobile owned by Peggy and Bob Walter of Santa Ana. Bob said he purchased the car in 1974 but didn’t get it running until 1994. “It was all in scattered pieces,” he explained. “The parts were all there, but it took me a couple of trailer loads to get it home.” 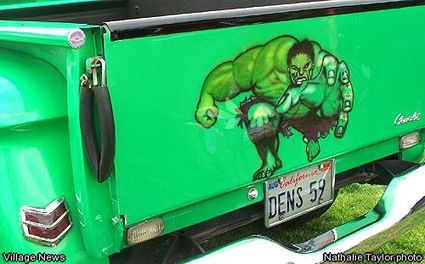 The couple has traveled about 15,000 miles in this car that has a top speed of about 40 mph. The Walters travel with a local club which is affiliated with the Horseless Carriage Club.

The Locomobile Company was formed in 1899 and they rolled out their last car in 1929. The name is a combination of the words locomotive and automobile. Large brass headlights are acetylene gas and the taillights are kerosene. The car has a magneto engine and a four-speed transmission.

Best of Show was a 1929 Packard owned by Karl A. Ramsing of Vista. He has had the car for 47 years. “I got it three months before I married my wife,” he said. The car was made into a truck at one time, then twenty-one years ago he and his sons tore it apart and rebuilt it.