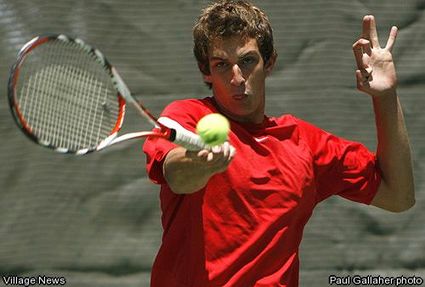 The Warriors, who finished their team season with a 15-5 record as well as a 10-0 Avocado League won-loss statistic, reached the CIF Division I quarterfinals before losing to Rancho Bernardo.

“We just had a dominant top-heavy team,” DeSouza said.

In 2007 Fallbrook finished second to Rancho Buena Vista in the Avocado League standings. Fallbrook’s two league losses in 2007 were both to the Longhorns. “Last year RBV’s team was really strong. They had a lot of seniors. They were just deeper than we were,” DeSouza said.

Fallbrook’s four losses during the 2008 regular season were to Torrey Pines, La Costa Canyon, Scripps Ranch, and San Pasqual. The match against San Pasqual saw each team win nine sets with the Golden Eagles being awarded the match on the tiebreaker of games won.

The top four seeds in the CIF playoffs are official while the remaining seeds are unofficial and may be juggled to ensure home matches for league champions and to prevent league opponents from meeting in the first round. Fallbrook earned the unofficial sixth seed and began playoff competition with a May 6 home match against Grossmont, whose 14-3 regular-season record included a 7-1 mark in Grossmont North League play. The Warriors advanced to the quarterfinals with a 10-8 victory over the Foothillers.

Fallbrook’s quarterfinal match May 7 was at third-seeded Rancho Bernardo, whose 16-2 victory over the Warriors ended Fallbrook’s team season. 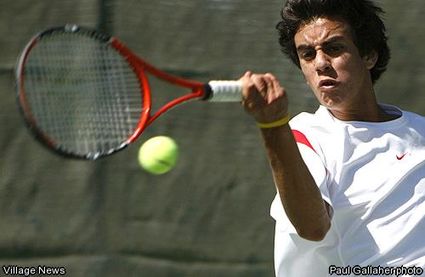 Warrior Jonathan Wechter returns the ball during his singles match.

The 2008 composition, including four freshman and only three seniors, gives the team hope for improving its showing in future years. “Next year’s team should be pretty strong,” DeSouza said.

“We met our goal which was to win league and to develop all the younger players and give the seniors a successful and fun last season,” DeSouza said.