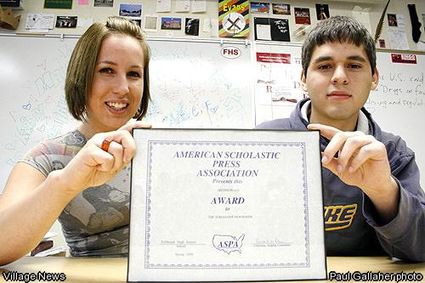 Daniela Rogulj (Class of 2008) won the Most Valuable Staffer award for her work as a political cartoonist for this year’s Tomahawk. The award is given annually by the San Diego Union-Tribune through its Newspaper in Education Program.

This year, for the first time, the Tomahawk entered the American Society of Newspaper Editors national competition in the high school category and took home second place honors.

“This award is a tribute to the entire staff and the remarkable strides we have made since returning [the] journalism [class] to Fallbrook High’s curriculum after a two-year absence. I am very proud of the kids for this accomplishment. It belongs to them. They did all the work,” Evans said.

This year the Tomahawk went 100-percent digital and full color, following the example of the 2007 Moccasin Yearbook, of which Evans is also advisor.

The Tomahawk has also partnered with Fallbrook Printing to publish not only in full color but also on 100-pound gloss book stock, the same paper used by the yearbook.

This was made possible by the generosity of owner Randy Folin, who is printing the Tomahawk at cost.

To show its appreciation for his contributions, the Fallbrook Union High School District Board of Trustees will be honoring Folin at its next board meeting, Monday, June 2, at 6:30 p.m.

Due to budget cuts, the journalism program has been forced to look for other sources of revenue to keep the student paper going. To that end, Evans has recruited members of the community to sponsor the Tomahawk. 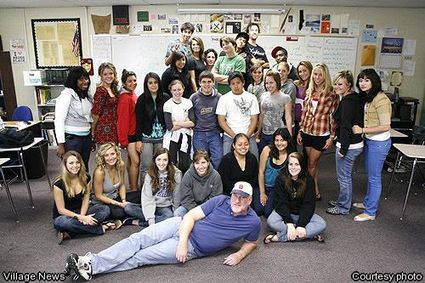 The 2007-2008 staff of the Tomahawk newspaper with advisor Dave Evans (in front).

“It is people and businesses like these that make being a part of this community such a wonderful experience,” said Evans. “The Tomahawk staff promises to endeavor to produce a student newspaper of which these sponsors, and everyone, will be proud.”