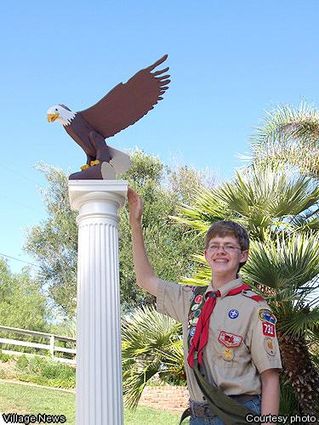 Eagle Scout Nick Kovsky stands by a monument he organized the construction of to recognize troops who have served in Operation Iraqi Freedom and Enduring Freedom.

FALLBROOK — Community members are invited to attend a special event that will include the unveiling of a new monument to US troops who have served in Iraq as part of the annual Flag Day ceremony at Fallbrook VFW Post 1924 on Saturday, June 14, at 11 a.m.

The monument features a hand-carved wooden eagle alighting from atop an eight-foot alabaster white column and a granite plaque that bears the following inscription: “This symbol of freedom is dedicated to the brave troops who have given their service in Operations Iraqi Freedom and Enduring Freedom. We Are Forever Grateful.”

The monument was created by local artisans and members of Fallbrook Boy Scout Troop 731, under the direction of Nick Kovsky, a 16-year-old Eagle Scout candidate from the troop.

Kovsky began the project two years ago as a way to honor members of the military while fulfilling the community service requirements necessary to attain the rank of Eagle Scout.

“I wanted to recognize the brave troops serving our country in Iraq,” Kovsky said. “The eagle, spreading its wings to fly into the air, is the perfect symbol for remembering our men and women in the armed forces who risk their lives to defend freedom.”

All of the materials and labor required to erect the monument were donated by local community members and businesses.

The eagle statue was created by fellow scouts in the workshop of master woodworker Dr. Andrew Patterson, MD. Patterson, who served as a Lieutenant JG in the US Navy during the Korean War, is a retired physician who now resides at the Air Force Village West Retirement Community near March Air Reserve Base in Riverside.

Finishing touches on the lifelike wooden sculpture were provided by local artist Tim Russell, an assistant Scoutmaster for Troop 731. To protect the sculpture from the elements, a protective spray coating was applied by MAACO Auto Painting & Bodywork.

Along with the unveiling, the public is encouraged to bring their worn, unserviceable American flags to the event for the VFW’s annual Flag Retirement Ceremony. VFW members and local Boy Scouts will carry out the honorable disposal of the flags by fire, in the manner prescribed by the US Flag Code.

Following the unveiling and flag ceremony, a luncheon will be hosted by the post, with all those attending the ceremony invited to stay for food and fellowship.