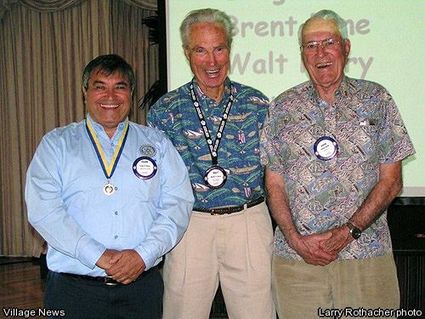 FALLBROOK — Connie Fish, Rotary Club of Fallbrook Foundation Chair, had a complete program of Paul Harris Fellow presentations for the gathering of a recent club luncheon.

Howard Clark presented a Paul Harris Fellow to his wife Dona. Paul Novak became a new PHF. Jim Landes received a new PHF pin, medallion and plaque to replace those lost with his home in the fire last fall. 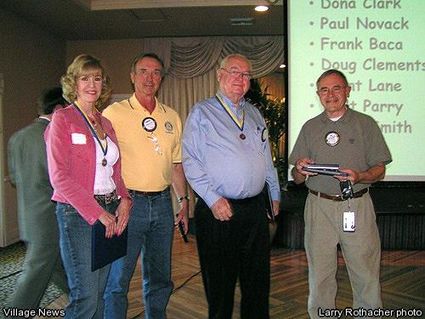 Recognized at the Rotary meeting are (from left) new PHF Dona Clark, her sponsor Howard Clark, new PHF Paul Novak and Jim Landes with his replacement materials for those lost in the fire loss of his home last fall.

Paul Harris Fellows are either Rotarians or those nominated by other PHF Rotarians who have given $1,000 to their local Rotary Club Foundation. Paul Harris was the founder of Rotary. As members give additional $1,000 they become PHF+1, +2 and so forth. The monies are then used either for local, national or international charitable causes.

Some of the recent $53,000 grant awards given to Fallbrook nonprofit causes came from such funds, along with monies raised from the Lobster on the Green event held each year on the first Friday of September.

Local causes included youth, seniors and general community benefit and support programs. International efforts include things like the eradication of polio and providing schools, wells and the like for small villages around the world. See http://www.rotary.org for more information.