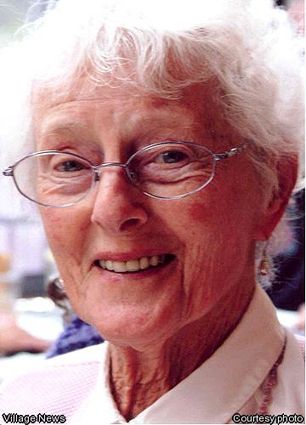 Ariel Arfon Madden, 87, passed away at her home on June 7, 2008. She was born on July 8, 1920, in Fresno, CA, and lived in Fallbrook, CA, with her daughter and son-in-law. She was raised in Ojai, CA, attended Ojai Valley School and was the only child of Ariel and the Reverend Thomas Oliver, former minister of the Ojai Presbyterian Church.

Mrs. Madden was a 1942 graduate of Occidental College in Los Angeles, where she had a double major in art and education. She received instruction in watercolor techniques from many artists, one of whom was Millard Sheets, the acknowledged founder of the California Style watercolor movement.

She became an accomplished watercolorist and won many awards in juried exhibitions in the San Diego area and was a former member of that city’s Senior Watercolor Society.

Her career as an elementary school teacher spanned 25 years in the Bloomington Elementary School District near Riverside, CA, where she lived during that period.

She was preceded in death by second husband Gil Madden of Frazier Park, CA.

Mor-Mor, as she was known by all who loved and honored her, will be sorely missed.